At one point after the Gaza War, Elie showed me some pictures they had taken there. They were on his phone. I wondered if I could share them on the blog, but knew it was too early, too much, too soon. In those early discussions, Elie told me one of his soldier’s had gone home for a break, a break that Elie gave to others but never took for himself because he was holding out, if the war continued, with the hopes that he would be allowed to attend his brother’s bar mitzvah ceremony that was coming closer and closer (he came home on Wednesday; the first part of the bar mitzvah was the next day and the weekend that followed).

“Did you put pictures on Facebook?” Elie asked his soldier.

“Yes. Why?” the soldier answered.

“Already?” the soldier replied, clearly shocked. “I just put them up!”

“Take them down,” Elie said again.

He got a note from the soldier today, long out of the army now. The soldier put the pictures back up on his Facebook, he explains, “because now I can.” The faces have changed, those soldiers have moved on to other places. Now it is simply pictures of soldiers, in a position that no longer carries any significance. Where once cannons fired, fields now grow. Now the soldier can share his pictures, because he can.

Elie will be emailing me a few of the pictures and I’m going to put some up here. “There’s one of me holding a Miranda,” Elie explained, referring to the orange soda he sometimes drinks. 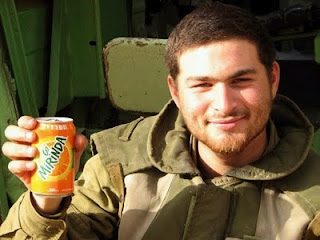 “Did I tell you about the game with the Miranda?” he asked.
“No, what game?” I responded.
“During the war, they brought us Miranda, Pepsi and 7-Up. I only like Miranda, so I told the guy in charge to save me a Miranda and each day the guys tried to steal the Miranda before I got it. So there’s a picture of me holding the Miranda because I got it.”

He told me of other pictures – of the cannons being fired, “an amazing picture” he tells me, where you can see the shell leaving the cannon. There are pictures from their time in the north, and many faces.

All of this is what I call Elie’s decompression, his taking out his thoughts and memories and ordering them in his mind. He’s looking into taking courses and beginning his studies. He’s investigating job possibilities and has already spoken to the firm responsible for the local mall security. They have plenty of non-combat soldiers coming for jobs, but the thought of a combat soldier pleases them. Elie will be able to quickly get a license to carry a gun. I don’t know yet whether he will bring it home.

He sleeps easily, goes anywhere – freedom from the gun, for now. He rearranged his room today, moving all the pieces we had placed because he was in the army when we moved and so I chose the layout. His new design is so much smarter; it feels like his room is twice as big. And there, up in the top corner of his closet, the highest shelves where you put those clothes that are out of season, he folded away his army clothes. Maybe it is therapeutic, maybe I’m reading more into it than there is. For now, though I remain a soldier’s mother, Elie doesn’t really feel that he is a soldier. He’s come back to being Elie after a long journey…a good journey…one of growth and friendships built, challenges conquered and lessons learned.

He’s ready for tomorrow – whatever that will be. His personal space is clean and organized, his mind open to the things he’ll want to accomplish in the coming months…and the smile that got me through so much – it was there when he got his Miranda, as it was there today as he showed me around his room.