I’m listening to the news as Israel waits for Ariel Sharon to die. He’s been in a coma for 8 years…8 years…since right after he pulled 9,000 Israelis out of Gaza in a unilateral move that most of Israel today realizes was nothing short of idiotic.

Dreamers don’t make peace in the real world, at least not in the Middle East. Peace is made by the strong. By those who force the other side to come to the simplest of truths – no one wins in war. Peace is made by those strong enough and brave enough to take a risk; not those too dumb to realize they are endangering themselves for nothing.

Menachem Begin made peace with Egypt – and though he was criticized by many in his own party for giving up land, the fact remains that Egypt has not attacked us in decades and now, in a way, is a partner in keeping Gaza under a naval blockade to ensure they don’t continue to amass weapons that they have and will turn on us (and Egypt) when the whim strikes them.

Rabin made peace with Jordan – no, not a particularly strong move, but Jordan was easy. And since this is my space and everyone should be allowed a bit of inconsistency in their lives, I will admit that Rabin was never my hero and I don’t think he was particularly brave or strong. At the time he made peace, it was the easiest of nations with which we had to deal and its king was the most reasonable.

Good or bad deal, like or hate Rabin, the peace has mostly held, so I’ll credit him for that even as I continue to resent the way he divided Israel and created the very unfortunate culture that led to his death.

Getting back to Ariel Sharon – he made peace with no one – no Arab country, and no peace within the nation. He created a rift that remains to this day, the orange people, the settlers and those who would wish them gone so that they could continue to live in a land of peace…except for the occasional bus blowing up, the firebombs, the missiles.

They didn’t bring Sharon to office, we did. We, who believed the promise that he would act for Israel; bring the strength and fortitude he brought to each of the battles he fought…to the diplomatic front.

As good a soldier as he was, that’s how bad a politician he was. His government was corrupt; his policies suicidal. Now, I leave his fate where it has always been, not with the left or the right, not with the media and the historians. I have complete faith that the Dayan Emet – the True Judge, will grant Sharon what he deserves – for the good and the bad. Yes, God will remember the bravery, but also the misery he caused. God will remember the building of the land, and the disengagement from it. God knows…

I heard Sharon speak a number of times – and listened to each word. I stood near him once almost 20 years ago as he pointed to the Mediterranean Sea in the distance. We were all standing in a small yishuv (settlement), less than a kilometer from my home.

In front of us was a most magnificent view…with the waters of the Mediterranean sparkling from the setting sun. Sharon said, “you see that, the sea? This is the first line of hills from the sea. You don’t surrender the hills.” A few years later, my yishuv was battling for its life, wondering if it would be in or out of his plan.

In the end, the mighty Sharon buckled, caved, bowed, failed. He surrendered all that he fought for, and more. He had built Israel…only to turn around and destroyed whole Jewish communities and homes so that they could, as we warned, become launching grounds for rockets.

He abandoned our synagogues so they could be burned and desecrated – the likes of which have not been seen since the Nazis rampaged Europe’s synagogues.

Sharon was stupid enough to accept their promises that they would not destroy them…and then we watched as they burned, as the Arabs turned them into mosques, as we knew they would. They fired rockets from the rooftops…as we predicted even before Sharon pulled families from their homes.

The families were pulled out of Gaza and for the past 8 years, as Sharon remained in his silent world, they struggled to come to terms with a country that rushed to remove them, but failed when it came to ensuring they had permanent homes.

I find it interesting that at long last, as the Gaza Jewish refugees are finally making strides towards completing new communities…Sharon is about to slip away.

There is, ultimately, something ironic in the timing, and even more ironic that the ones who will mourn the most for Sharon are not the ones who most supported him during all the years he fought and led Israel.

We will not celebrate his death; that has never been a Jewish concept. Perhaps our final gift to Sharon is even worse – we will ignore it all.

Yes, he was a hero, my hero. He crossed rivers to save his country…but he caused rivers of tears years later. 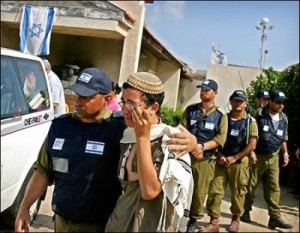 Long ago, before sickness took him, he lost my support; betrayed my vote. He lied to get my vote – that only a strong Israel could survive in the Middle East – that was the truth. Then he said he would keep Israel strong – and that was the lie….he pushed to make us weak, to teach the Arabs that we could not only be beaten, we would be stupid enough to beat ourselves.

The Second Lebanon War, probably the closest Israel has ever come to defeat…that was a gift from Ariel Sharon and his disengagement plan. The rockets on Tel Aviv, Jerusalem, Beerhsheva, Ashkelon – those were gifts of Sharon as well.

For me, the Ariel Sharon that stood as a lion of Israel, that defended our country and fought with all he had in him…that man slipped away a long time ago, overpowered by the dirt of politics and the weakness of those who crave power.

I can’t deny what he did for Israel in the past…but I believe that those who wish only to remember Arik Sharon, the general, the fighter of Israel are wrong to deny what his later actions cost us.

Once he was my hero…now, his memory lies in the ruins of Gush Katif and with each missile, I remember not the brilliance of the soldier he once was, but the devastation he caused tens of thousands of Israelis…and more, the constant danger we face now from missiles that never should have been allowed to be placed so close to our borders.

2 Comments on Once He Was My Hero