I’ve never considered this before, but maybe I should have. How you salute seems to tell a lot about who you are, what you are, what you dream of being. This salute has haunted me for days. I stare at the picture, at the people in it.

It is the moment that Gilad Shalit stepped out of the helicopter to find Prime Minister Bibi Netanyahu waiting to greet him. As he would for a most a president or most honored visitor, Bibi is waiting there. I don’t know if everyone can tell, but if you know the contours of Bibi’s face, you can see, there on the right side, the line of his cheeks.

You know, even from this angle, that he is smiling, almost grinning with happiness and relief. There, the man behind Gilad, there too, there is such joy, such relief, such happiness.

And there is Gilad. Quiet. Hesitant. Not quite believing he is home. His eyes are slightly lowered but the movement is clear. A salute to the prime minister of Israel. His Commander in Chief. The movement is voluntary and a recognition that Netanyahu is the leader of his country. 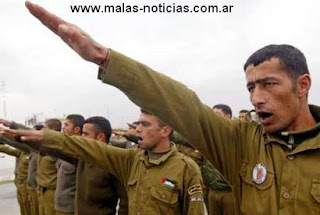 Today, I saw another salute. I don’t know where the picture came from – it was on someone’s Facebook page. I followed the link but didn’t come to a real site. Maybe it isn’t real. I can hope it is Photoshopped. Not real. It seems to be a unit of Palestinians and they seem to be saluting…the very same salute the Nazis used.

I hope someone can tell me this is false. That Palestinians don’t salute this way. That is the Palestinian flag on the uniform, I believe. What more can I say…a salute tells so much.

Last night, again, Israel was hit with rockets and today, our foreign minister announced we were donating 30 boats, 187 life vests and 1,000 sets of medical supplies to Thailand to help with the devastating floods there. I would rather live in a land that saluted as Gilad did, than in a land that would fire rockets and salute as the Palestinians are saluting in this picture. Any day, every day, for the rest of my life.