Israelis love to hike – it is a national hobby, a collection of stolen days that allow us to walk this land, climb to its heights, explore its depths. There are so many places to hike – for all ages. Some places have water; others are dry. Some are a combination of water and mountains. The water is the reward after the hike – or sometimes it is the destination in the middle.

We live in the beautiful city of Maale Adumim, perched atop hills to the east of Jerusalem, just to the west of the Dead Sea. We are less than 10 minutes from Jerusalem – and 20 minutes on the clock from the Dead Sea.
In between us and the sea are a series of deep gorges and a series of streams that run through the oasis. It’s so incredibly beautiful. There are two places that we go to – both about 10 minutes away. One is more easily reached; the second deeper into the mountains. The first is near an Israeli village; the second is called Wadi Qelt. A wadi is a dry river bed that floods in the winter. We hiked there yesterday for a few hours. Cooled off in the water and then hiked back up – all 130 meandering steps to where we’d left our car.
We took a lot of pictures – mostly on Aliza and Lauren’s cameras…I only took one with my phone. I’ll try to post the others soon. 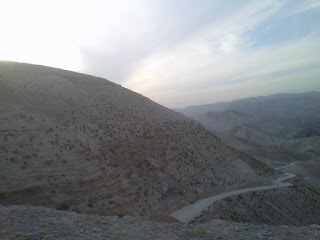 I’ve been wanting to go to Wadi Qelt for a long time. But at least three times in the last decade or so, Palestinians have attacked and murdered Israeli hikers there. Other than a few times a year when the army sends in units to protect hundreds of tourists, it is no longer safe to go without a weapon.
I didn’t want to go without someone (in this case, Elie) being armed. Though we saw Israeli soldiers later in the hike, I was painfully aware of how isolated the area was – despite seeing so many others hiking along various routes.
As I love to do, we chose the area less traveled. While most people went off to the left where there are some pools and beautiful scenes, we went off to the right. We walked in a water channel until we came to an area where the water had been diverted to form a small pool. There were two other families there initially. One left and we joined the other for a short time.
I only thought to take a picture with my Blackberry as we were driving away from the pools. You can see the road we drove along on the right side of the picture. I had many mixed thoughts as we walked. One was of those – two couples and a pair of friends – who had come here alone and apparently unarmed – simply to enjoy the amazing views in our land and were murdered.
At one point, we weren’t sure if we were going the right way or if we’d have to backtrack to find a place where we could cross over to the other side. Elie said he’d scout ahead to check things out. That left him out of my sight. He has a gun, I kept telling myself but I found myself listening harder to make sure I didn’t hear anything, shouts, gunshots, whatever…it was a bit upsetting.
We caught up with him as he was hiking back to us to say that he’d found a place where we could cross to the other side. Nothing happened; all’s well.
The “crossing point” was near a few houses occupied by Bedouins who live deep in the gorge. They have chickens, a goat, a donkey, and two or three cars. They sat hear their house watching hundreds of Israelis trek through the wadi. A bit entrepreneurial, one man was using his ancient BMW taxi, probably long banned from Israeli roads, to ferry hikers up the long path for a free as we drove to leave.
Two Israeli teenagers asked us for a ride, but we explained our car was full – we saw them in the back of the taxi later. It was there we saw Israeli soldiers, making their presence known. We are here, the message was clear – today you will let us hike in our land and you will not do anything violent.
We did not bother the Bedouins; they did not bother us. There is no common language we share; no common destination or path. They live as they have for hundreds of years – they will spend today searching to see if anything was left behind, tend their livestock and live, for the most part, in peace.
We will return to the heights – literally and figuratively, where we live. It is incredibly sad to know that Wadi Qelt and other places in this land are only accessible behind the protection of a gun – because too often, Israelis in their love of hiking, have learned that even those who live in seemingly quiet and peaceful places, can turn violent and attack them.
Yesterday and for the last three days, Arabs have rioted on the Temple Mount? Why – simple – as we did in Wadi Qelt, Jews felt the need to go to the Temple Mount – some would quietly whisper prayers. Jews are not allowed to openly pray on the Temple Mount, our holiest site in the world because Arabs built a mosque on top of the ruins of our Holy Temple and now occupy that area. And so, in their occupation, we are not allowed to pray there.
It is an amazing concept – in all the world – Jews are forbidden to pray at what we believe, what we know, to be the holiest place on earth. It is a site that is holy to three religions – but one controls it. No, not Jews – but Arabs. And their control means that the mere sight of Jews up there is enough to turn them violent.
They have to riot, you see. Because if they don’t, they will give the impression that it is acceptable that we dare to worship from the same location. They deny our history again and again. They say the Western Wall, the last remaining retainer wall of the Temple Mount, is where Mohammed tied his donkey.
A few times a year, we rebel slightly – no, not in violence – but simply by going to these places. It is a reminder that the Arabs hate because in putting ourselves in front of their eyes, we remind them in the simplest of terms that even in their own Koran, it says Israel was a gift God gave to the Jews.
They must hate that…