They say man plans and God laughs… well, I had plans this morning. Jerusalem is expecting to be hit by a huge snow storm – and I started trying to plan who had to go where, when, etc. This time, I decided to drive Aliza to school – it’s cold out there and she really isn’t used to it. Elie’s schedule and mine blend pretty well – he often drops me at work, takes the car and then comes to pick me up after he finishes his courses.
We often leave a few minutes earlier so that we can drive Lauren somewhere where she can catch a bus. The “odd man out” this morning was Davidi. He needs to get to school which is geographically very close to Elie’s college but…there’s often tons of traffic in both directions from the college to the high school and back.
So, Davidi lost out. I offered him a ride to the front of the city or something – but he decided to just catch a bus. I felt bad for him, but he has to take responsibility for getting himself to school if he makes plans that take him away from the dorm in the middle of the week. He was home last night – happily found out he passed the course and can now volunteer on the intensive care ambulance in addition to the regular one (the “lavan”).
Davidi caught the bus moments before we left the house to drop Aliza. We saw him at the bus station, but he decided to stand there rather than accept the lift. He wasn’t annoyed – it was fine; so we drove on to Aliza’s school and out one of the alternative exits of Maale Adumim and within minutes, knew there was something not normal about the morning’s commute. Bumper to bumper, according to Elie’s amazing telephone and the WAZE application (a social GPS that takes in feedback from other participants to warn you where there are delays and redirect you.
WAZE said it was completely clear AFTER the checkpoint and barely moving before. It took us almost 2 hours to get through the jam – to find, as WAZE indicated, that though there are three lanes of traffic through the checkpoint, only one was working. Thousands of cars had to filter through that one lane because…there was a power outage and the bars on two lanes were stuck down. 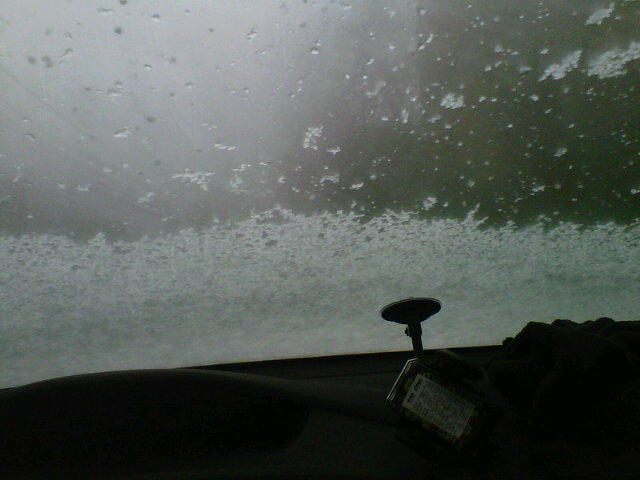 Davidi actually made it through before us – but we continued on, dropped off Lauren…went a few meters, and the car died.  We called my husband who got some things and came to see if he could help, and we called the towing company – it took them three hours to get there. While we were waiting, it was hailing outside. This is a picture of the front window as the hail came down. Several people tried to help us but the battery wouldn’t be boosted and nothing helped. The two truck finally got there and took the car. Elie went along for the ride while my husband drove me home and then went off to try to help figure out what the problem is.
So, it’s mid-day in Israel – the work day was a bust. I can work from home now finishing off things that need desperately to be done.
Davidi called a while ago – it’s very cold and his hood is full of snow. He’s going to send me pictures. I checked to see where Shmulik is – he’s safe, at work. I’m not sure where my older daughter is, or my son-in-law.
But Israel is being pounded by rain and snow and hail and it’s really cold and despite all of that, it seems that Israel is united in being enthralled by this storm. The Sea of Galilee is filling with water; the desert has small rivers running through it and whatever tomorrow will bring – today the children of Israel are celebrating snow and rain and winter. And even if the car needs to be fixed…I’m happy to have it hailing away for a while!

2 Comments on Hail Away….