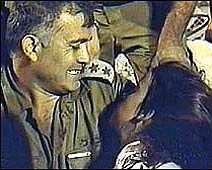 Two things happen almost simultaneously in Israel when a natural disaster strikes somewhere in the world. The first is that Israel usually finds out if help is needed, and the second, Israelis immediately want to know if any of our own were there. This has always been the case and slowly, we hear news of how many are missing…until the last one is reportedly found. This was the case during the tsunami when Israel relentlessly went in search of its citizens, flying rescue teams to help the native population as well as teams to help in areas where it was knownt hat Israeli tourists were vacationing.

This was also the case several years ago when a terrible earthquake hit Turkey. W

ithin a very short period of time, Israel’s rescue forces set out with special equipment, helping to save lives and find victims. One special team dedicated itself to finding an Israeli family. First, Israelis found the body of a young Israeli boy. They kept searching for his twin sister, Shirin, her father and grandparents. Her mother had managed to escape the rubble and was trying to get help for her family. Ultimately, Shirin was pulled from the rubble by Israeli rescue workers in relatively good condition. Though, her father and grandparents perished, the rescue of Shirin and the touching site of an Israeli soldier holding Shirin minutes after the rescue remain one of those images that remain in our hearts forever.

Now, in the aftermath of another bad earthquake, this one in Peru, Israelis are once again moving forward to offer assistance, and also checking about the fate of Israelis in the area. Almost immediately, it was released that 120 were missing, most likely due to a failure of the communications system that prevented them from contacting their families. Hours later, only four remained as more and more travelers contacted worried relatives in Israel.

Rescue teams may be sent to Peru

Foreign Minister Tzipi Livni spoke with Peru’s Ambassador to Israel Luis Mendivil to express Israel’s condolences to the Peruvian people and offer help. President Shimon Peres has also offered his condolences and ZAKA, a national aid and rescue organization that also focuses on respectfully handling casualties, has offered to organize and fly volunteers there as well.