Last week, on the way home from picking Elie up in Beersheva, he received a short phone call from his commanding officer. Later, he explained to me that there had been an attempt to kidnap a soldier and military intelligence was warning that other attempts might be made. Commanding officers were immediately told to account for their soldiers. For most, this was easy because the soldiers were on bases. For some, this meant tracking someone down. Elie was unaccounted for because he’d been given special permission to leave to see his visiting uncle.

“Elie, where are you?” asked his commanding officer.

“In Beersheva eating pizza,” Elie explained and then added that his mother was there with his uncle and soon he would be driving home in his mother’s car. All is well. All accounted for.

This morning, after having Elie home for the weekend, Elie had to get to a distant location rather early in the morning. He could have taken the bus (that would have meant taking 4 or 5 buses) and ending up at a junction from which he’d then have to walk a long distance carrying a heavy backpack. We didn’t know this last part, but it turns out the army was wrong about the “10 minute walk” and a few soldiers hiked for almost an hour. As we passed the intersection, we saw two soldiers (Elie recognized them just as I saw the blue berets), and we gave them a ride. With their large backpacks, there was no room for another soldier from the same unit that we had to leave behind.

Seeing the distance, I was glad that I’d decided to drive him and even happier that he’d accepted. What it comes down to, is that I’ve decided to indulge my need to be with him as much as I can, to help him however I can. The army doesn’t spoil their soldiers, and so I believe that I have that right. I’ll hang his laundry, drive out of my way to pick him up. I’ll buy him all sorts of sweets that I wouldn’t allow my other kids now and spend almost any amount of money to buy a better, warmer undershirt or something that he wants because I can’t stand the idea of him being cold or without something that he needs.

I don’t want him to know it, but deep down I know that I can’t say no and I’ve accepted that I don’t want to. The good thing is that Elie has matured enough not to take advantage of it. I offered to pick him up last Thursday night – it would have meant a drive of over an hour for me, but I just wanted him home. He chose to catch a bus (actually a train and two buses), thanking me in the process and letting me know that if he couldn’t catch the last bus that went right near our house, he’d call me to pick him up from the front of Maaleh Adumim (even that wasn’t necessary).

So last night, when I realized how far he was expected to travel, and to arrive there by 9:30 a.m., I offered to drive him. I knew the general location – to about a mile away. From there, we were going to look for signs and use the GPS I just got. There’s a funny story just with the GPS, but I’ll leave that for now. As we got close, Elie got a phone call. Elie’s side of the conversation was brief.

After he got off the phone, Elie explained. Part of the Commanders Course is learning to be a commander and, as I’d seen the week before, part of being a commander is taking charge of your soldiers and knowing what they need and where they are. If the schedule changes and the soldier isn’t where he is expected to be, he has to let the Commander know, and the Commander has to keep track of all the soldiers in his unit. To learn how to enforce this responsibility, to make each participant of the course feel this, they rotated the responsibility among the participants, using the others in the course as the unit.

Being responsible for the other soldiers in the course requires a different set of skills, depending on when you are given this job. The hardest weeks are the first, the last, and one in the middle. The first is hardest because there is much to be done and everyone is settling in to the idea of being a commander and the new responsibilities. The middle week is hard because you are being tested physically and emotionally and the army is pushing hard to separate those that can make it through. And finally, as Elie explained, the last week is hard because you’ve been at this stuff and you’re tired. You want to finish and there are many changes in the schedule. You want to slip out of the routine, have a little extra freedom. You can almost taste it. Within days, you’ll have a week off (hopefully). You are on the brink of change, another round of changes, and you are gearing yourself up for that as well.

Elie has been tasked with being responsible for the last week of the course. They had to let Elie know if they wouldn’t arrive on time today, and where they were last week. Today, after being home for the weekend, the soldiers had to make their way to a meeting place up north for a new special seminar. That was why Elie received that phone call. One of the boys had accidentally left his backpack on the bus and was going to try to track it down. That meant he would be late arriving to the course. It was the soldier’s responsibility to check in with Elie and get permission, and Elie’s responsibility to account for the whereabouts of the soldier.

Silly for me to feel like there was a change in the tone of his voice, but there it was.

I’ve been hearing the Commander’s voice more and more when Elie is at home. Lest you think that Elie is the perfect ideal – as one might think sometimes from reading this blog, I can tell you that he’s not. That doesn’t mean I love him less – probably that I love him more for who he is and what he is becoming. It would be funny, except Elie would never laugh about it.

His room is…well, not something he’d ever want anyone to see and yet the Commander ordered his brother and sister to clean their rooms this weekend and the Commander explained that their mother was working hard and couldn’t do everything. There was no reason, he explained, why they couldn’t and shouldn’t wash their own dishes. From the moment he came home last week, he was ready to take command of the house and, for the most part, I let him. Mostly, I let him because I enjoyed watching him and watching how others responded to him. His younger brother, who is at an age where he doesn’t like to do what he is told, did what Elie ordered, or explained why not. Elie handled him, with reasoning when necessary and with orders when the reasoning didn’t get past a 12-year-old’s stubbornness.

On Friday, Elie picked up his sister’s backpack and promptly told her to empty it and take out everything she didn’t need. It was just too heavy. This morning, before Elie left, she came over to him and asked him what to do tonight and then stood looking up at him with a very serious expression on her face as he listed her jobs.

The Commander had spoken and amazingly enough, we all respond. But even more amazing is the fact that Elie has learned to control the Commander. He has learned, in this course, how to command. Or perhaps he always knew. It is something to think about. There was always something in Elie that had him commanding others in the family. What he has learned is not so much the art of commanding…as the art of getting your commands fulfilled. And this is accomplished by listening, not just ordering.

“Which is right?” I asked him.

Yes, it depends on how the commander will command, on the circumstances, on the job at hand. This week, in the next few days, Elie will finish the Commanders Course. For all intents and purposes, last week he finished his last test and the rest is just the final days until the ceremony later this week.

He has now been in the army for 11 months. The boy I took to the meeting place on that March morning has changed, Or perhaps “changed” is the wrong word. He has developed. He has matured. He is everything he was, the same sense of humor, the same twinkle in those gorgeous blue eyes of his, the same impatience at times. And he is so much more.

I have thought when to end this blog – it’s been almost a year. I thought perhaps to stop, but I have been overwhelmed with responses – many comments on the blogs, but even more sent to me privately.

In just a few days, Elie will complete this course, but he has two more years to go. Two more years to serve his country. For all that time, and as I have come to understand, fo 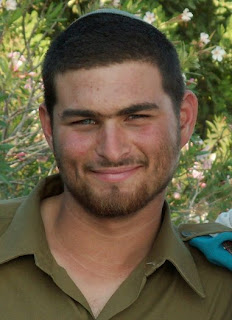 r the next few decades as he and his brothers serve in the army and then join the reserve forces to serve as their country needs them, I will remain a soldier’s mother. I guess the need to explain what that means and how proud I am to be that mother, will keep me writing.

May God bless the army of Israel and watch over our sons and keep them safe.

3 Comments on Where Are You, Soldier