There was a terrible traffic accident late this evening inside the Arab neighborhood of Azzariya. An Arab truck driver crashed into the rear of a car 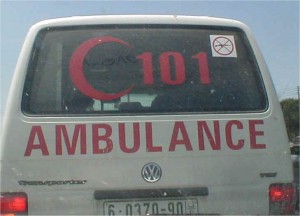 Where else in the world do they need to put a sticker asking someone not to bring a gun into the ambulance?

containing an Arab family. The wife, who was pregnant, was sitting beside her husband in the front seat, several children sitting in the rear. From all appearances, the mother was not wearing her seatbelt and was thrown against the car upon impact.

As is often the case when a medical emergency occurs in this area, a call went out to neighboring areas and my son’s ambulance was called to the scene. As they rushed to the vehicle, the medic told my son and the others to hurry, that a pregnant woman was in the car that was involved in the accident. They jumped into the ambulance, sirens wailing as they raced to the edge of Maaleh Adumim and beyond.

Since the Intifada, most Israeli cars turn to the right and take the long bypass road to Jerusalem to avoid being attacked, stoned, or ambushed. Once, before the Intifada, they turned to the left, to take the shorter road into Jerusalem via Abu Dis. But that time is gone and Jews are no longer safe and so each day, we turn to the right and first descend and then climb up to the City of Peace. This time, without army escort, the ambulance turned to the left, to Azzariya.

Knowing that a pregnant woman had been injured and that time was of the essence, the Magen David Adom (MDA) squad prepared the ambulance as they drove and within minutes, they arrived at the entrance to Azzariya… and there they stopped.

In a normal world, an ambulance would race to the scene, analyze the situation quickly, and move the expectant mother to the hospital. In our world, the ambulance must take into account the likelihood that its own passengers might be injured and that a rescue team might end up needing to be rescued themselves.

It wasn’t that long ago that David Buhbut, our neighbor, was lured into Azzariya and murdered, his charred body dumped among the garbage heaps on the outskirts of the neighborhood. For some reason, he still believed that an Israeli could turn to the left and enter and exit Azzariya safely. But he didn’t come out alive.

From his death, we all learned, again, the bitter truth of our relationship with the Palestinians in this Intifada-world they have created. Tonight, the Israeli ambulance on its way to help an Arab family, could not enter Azzariya safely and was instructed to wait until either an army escort arrived, or some way was found to bring the accident victims out of Azzariya.

In the event that they did enter, my son was told by the medic, he was to stay in the ambulance, no matter what. Within minutes, an Arab ambulance brought the injured family out. They were transferred to the Magen David Adom ambulance, which then rushed the family to the hospital in Jerusalem.

In the end, the story has a happy ending, as mother and child are fine and are expected to make a full recovery. But the story could just as easily have had a tragic ending. Ambulances shouldn’t have to wait to assist injured civilians. Ambulances shouldn’t be stoned and firebombed. Ambulance personnel should not have to worry about being injured when all they seek to do is assist those who are in pain.

But that is in a normal world. In our world, since the Arabs began their violent and deadly Intifada, dozens of Israeli ambulances have been stoned, firebombed, shot at, and attacked and many medics have been injured or killed.

In the first two years of the Intifada alone, more than 80 MDA vehicles (including 67 standard ambulances and 11 mobile intensive care units) were damaged, and at least 11 MDA staff were injured.

As if it were not enough that they attack our ambulances, the flip side of this tragedy is equally upsetting. The cynical use of Palestinian ambulances to move weapons and terrorists, or smuggle explosives into Israel has been clearly proven and documented (including videos that have made the email rounds and been posted to numerous sites on the Internet). Just a few months ago (in May, 2004), a Reuters cameraman filmed Arabs using a United Nations ambulance to smuggle terrorists in the Zeitoun district of Gaza.

s (PRCS) ambulance. The ICRC condemns such abuse of an ambulance of the Red Crescent emblem….The ICRC observed how a device was taken out from a vehicle and detonated in the presence of a number of onlookers.”

As a mother of two volunteers who regularly go out on ambulances, I am comforted by the security measures that are taken to protect my children. I am honored that they volunteer and proud that when it comes to caring for their fellow human beings, they do not differentiate between Arab and Jew. Tonight my son helped an Arab mother, frightened and in pain, to an Israeli hospital for treatment.

As I gave thanks that my son returned home safely, I thought of the fear and pain that mother must have suffered until she learned that she and her baby would be fine. In the end, I can only conclude that if she suffered in the moments before she was taken to the Israeli ambulance, the Arabs have only themselves to blame.

It is they who have made it unsafe for Israeli ambulances to enter Arab neighborhoods and they who have used Arab ambulances for evil purposes. If you intentionally target relief workers, as has been done numerous times in the last four years, it cannot come as a surprise that these workers would hesitate to put themselves in harm’s way.

I do not want my son to enter Azzariya. It is not a safe place for any Israeli. If, as an Israeli, he cannot enter safely, than he should not enter at all. And, if, as a volunteer on an ambulance, that means that he must wait outside, until the victims are brought to him, the victims must rise up and protest the nature of a society that would targ

et ambulances and medical personnel. They must understand that in the end, the ones that they have hurt are themselves.

It is through the terrorism inflicted by a few, that many more suffer. Tonight, for once, it was an Arab mother who suffered as a result of these terrorist actions. It was not my son, thanks to the wisdom of the Magen David Adom, who understood that an injured caregiver is of no value and it is not fair to place an innocent, even a volunteer, in harm’s way.

What of the delay in getting much needed medical assistance to this Arab family? Regrettable, infinitely sad, and completely avoidable. I asked my

son why the Arab ambulances could not have transported the family directly to the hospital and, at least, avoided the transfer time between ambulances. He explained that in the long run, the Arab ambulance would have spent more time being searched at the checkpoint through which we travel every day. Faster to transfer the patients to an Israeli ambulance, which has never been caught smuggling explosives, terrorist fugitives, and guns.

And so the faster way is to transfer the injured patient to an Israeli ambulance. A short delay, but a necessary one. And again, we circle around to the bitter truth. If they did not attack Israeli ambulances, our children would be able to rush into their neighborhoods and assist them, 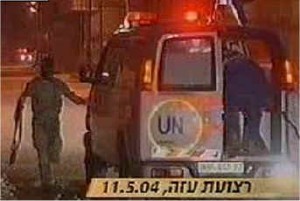 UN Ambulance being used by gunmen in Gaza

rather than waiting until they are brought out to a point where it is safe to transfer them into our care. If they did not use their ambulances to smuggle weapons, the ambulances could be given the respect they should deserve and be allowed fast and easy passage to the nearest hospital.

Tonight, although my son returned home safely, a young mother probably suffered longer than she should have. This is what the Arabs have done to themselves.