Yesterday, we drove south to Elie’s base to attend the Tekes Kumta (a ceremony in which they give each soldier the appropriately colored beret of his division). Elie is in the artillery division, and so his beret is now blue. But more than simply giving the beret, the ceremony is one that marks a major moment in his army service. He is now a soldier, not just a potential soldier in basic training. He is already qualified to go on patrols, as he did recently near Israel’s southern border. In his case, because he has a specific task in the artillery division, he will undergo approximately 3 more months of training, though this can be intensified and shortened if the need arises.

The ceremony itself lasts only a few minutes, but what is amazing is what happens before and after. We slept only briefly the night before, getting up around 5:00 a.m. in order to get to Elie’s base by 8:30 a.m. When I and Elie’s two brothers arrived at the base, we went through a security check and drove onto the base. Soldiers sat at the possible turnoff points – we were told to drive straight to the parking area and never thought to do otherwise. 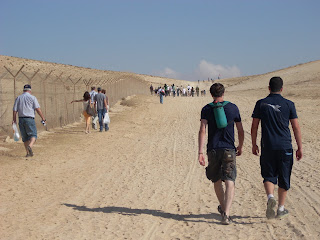 After we parked, we simply followed other parents – exiting the base and walking into the desert, past the outside fence, and up to the top of a small mountain marked with a flag in the distance. This was the “high” point from which we would soon see our soldiers. Our sons had been walking through the night, heavily outfitted with all their equipment and for part of the night, carrying the stretchers of their “wounded.”

This is, despite last summer’s disastrous realities, part of Israel. We still believe that we won’t leave a soldier behind. The stretchers were filled with equipment; all soldiers would walk. We waited on top of the hill, at one point getting a briefing from a young female soldier who explained that the soldiers were exhausted and dirty, but would be rejuvenated when they came around the next hill and saw us waiting. “ 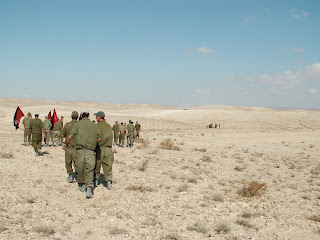 Call to them, clap for them, encourage them,” she needlessly told us. “Show them you love them and are proud,” she added.

A few minutes later, a large group of soldiers came from the base with flags. Unlike the parents, who were asked to wait on top of the hill, these soldiers set off to meet their comrades. They too would cheer them on for the last few kilometers. In many ways, this is Israel. [Only months later would I learn that these were soldiers currently in the Commanders Course, coming out to cheer these new soldiers joining their division. Only months later, Elie would be one of those coming out to greet other new soldiers, as these soldiers here in the picture were coming out to greet Elie.)

Two jeeps came into sight on a hill in the distance and waited. They were the fore-guard of what was to be a long line of soldiers, brigade after brigade, each wearing their unique symbols. 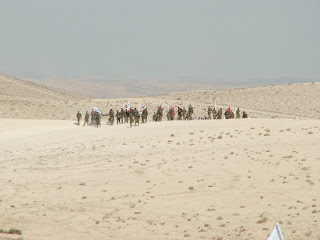 And then suddenly they were there. Streaming quickly over the mountain top in the distance, coming quickly towards us. We could hear them singing and they could hear us cheering.

The flags of the soldiers who had gone to join them merged with the column and we could see in the distance as the soldiers hugged briefly and high-fived the tired group. As one, they turned and quickly moved into the group of waiting families.

The heat was oppressive; the dirt and dust rising into the air as so many people 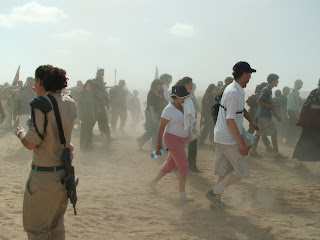 moved through the sandy ground. I saw a few soldiers limping and some being assisted by others.

They were in pain and yet had refused to be evacuated or driven this final step. It was impossible to find Elie at first and we realized somehow he had gotten past us. They are all in green, all wearing hats, all with guns and most were covered in layers of dirt.

We finally caught up with Elie looking tired and dirty, his face painted with camouflage. He 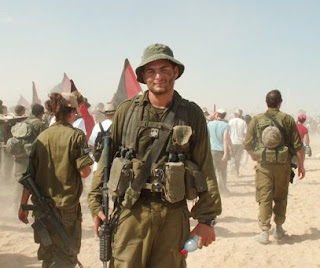 looked wonderful and best of all, wasn’t limping or injured. My heart settled a little but it was all back to business, back to moving quickly to enter the base and finish this walk that had taken them hours. We handed him cold water to drink and walked with him the final distance.

By contrast, the ceremony was relatively easy. The boys had been given time to change their shirts and undershirts, drink and sit for a few minutes. For some, this was a blessing, for others it was horrible because it gave their bodies time to react, for muscles to contract painfully. Some were helped to waiting ambulances. Elie returned to us looking better, a little more rested. His father and sisters had arrived, and we were once again a family waiting to share this moment with Elie. 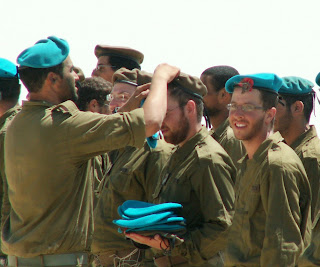 The flag was raised, some speeches, awards for some soldiers, including Elie’s commanding officer, and then the boys were given their berets. The commanding officers swept the old green ones off their heads, replacing them with new blue ones.

After the ceremony, several groups ran to eight waiting cannons, while a voice over the loudspeaker explained what was to happen. The soldiers sat on the ground, as did many of the spectators. We blocked our ears for the waiting boom, but even so, it was an incredibly loud explosion. Far in the distance, we saw the impact on a mountain. Even prepared, knowing the boom will come in a second, you can’t stop your body from jerking at the incredible noise, the power released, the accuracy of the aim. This was their goal – not just to fire, but to aim at a specific target.

The final “show” was watching a rocket shot into the air. It was an amazing site – a ball of fire flying through the air and a whining sound before it fizzled. It was a blank. Too often, these have been fired against Israel causing death and suffering. This new group would dedicate the next few years to working against our enemies and their rockets.

The soldiers were released and threw their new berets in the air, a customary celebration marking that a new phase has arrived. For Elie, this means that he no longer has to call his commanding officer, “Commander” but can call him by his first name. They are, after all, soldiers with a common goal now.

We were able to sit with Elie for just over an hour. This time, more aware of the Israeli custom to bring food, we had packed two coolers. But I could see Elie was nervous about the time. They had to be back by 1:15 – the army wasn’t done with them, despite their rigorous training the night before.

After packing away their gear and dismantling tents today, the soldiers are about to be released for a short vacation at home with their families. A week to be what they are deep inside, sons, young men, boys. Elie will hopefully sleep late, meet friends. We’ll take some family time, some trips around the country. All too soon, it will be back to the base for some training and then, it seems, training up north as well. Israel never knows where and when the next war will be. Too much for a parent to consider, so for now, I focus on yesterday and memories of waiting for Elie on top of that hill and of the moment he appeared beside me looking healthy and strong.

“What unit is your son in?” I was asked many times. The answer for most parents didn’t really matter. We’d all come together in the middle of this barren desert, to stand in the heat for hours, just to spend a brief time with our sons.

Before Elie went into the army, I started this blog almost as therapy. Elie came to Israel at age 5; in many ways, his mother tongue is Hebrew and not English. Though he speaks English fluently, he doesn’t love to read it. The more words there are, the greater his hesitation. This blog is my therapy, my way of sharing the experiences of one Israeli family and one Israeli soldier with many. Family here in Israel and in the United States, but also complete strangers around the world read about Elie and understand that there is a human face to each soldier.

“Call to them, clap for them, encourage them. Show them you love them and are proud.” This is what we did yesterday. What we will do tomorrow and next week, next month and next year. The soldiers of Israel fought the desert yesterday, and won. Someday soon, they may fight our enemies. They will do so with equal dedication because, as they showed yesterday, to the last man, they will bond together to do what must be done.