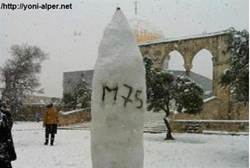 When you last got hit with a snow storm, what did your children do? Mine have built snowmen in the snow, had snowball fights and when I was young, we built castles and fortresses. I’ve seen amazing ice and snow sculptures but I have to admit, I’ve gone all my life never once seeing something like this…

This is a picture taken near the Dome of the Rock – you can see the gold dome in the background. This is, to the Jews, the holiest place on earth – the site where our two holy Temples were built and destroyed. It’s very common in Israel to find many of our holy sites have now been built upon – mosques over what was ours.
Joseph’s Tomb, Samuel’s Tomb, the Cave of the Patriarchs, on and on….
We’ve grown accustomed, to these sites. And now this – it isn’t enough that on our Temple Mount, they build their mosques. It isn’t enough that it is we Jews who are forbidden to pray there for it might offend…can you imagine…it might offend the Arabs. In limited numbers, we are allowed to visit this site but if we dare to whisper a prayer, even move our lips and close our eyes, the police will swoop down and arrest us. 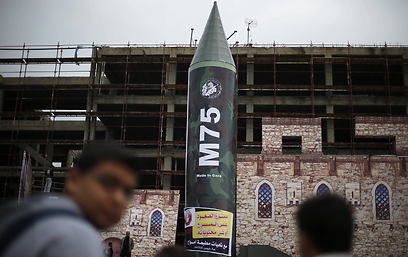 And now, on a site meant for prayer and peace, Arab children take the blessing of snow and turn it into a missile – an M75 missile that they would shoot at us. And, as if that wasn’t enough, they are re-arming in Gaza. A news report said that missiles are pouring into Gaza…preparing for the next war.

We celebrated yesterday with snowmen and angels in the snow – and they built a missile on holy ground.