I feel like I write a lot about Elie’s stories and less about Shmulik’s experiences and feelings. There are reasons for that. Shmulik chose to enter the Hesder program. This cut his active service time to a year and four months rather than 3 years. He will do his Reserve Duty yearly, as Elie will, for the next 20 years of his life. In addition to this year and four months, he will dedicate more than three years of his life to studying. With the six months of training, there were about 8 months in which he served as S. driver. Much of what happened remains confidential; only bits and pieces come out.

The other day, Shmulik and I were driving to Jerusalem (read here that he was driving and I was enjoying being driven). I mentioned how few stories I had and he explained, as I have above, why that is so. I don’t remember how the conversation talked to propaganda and lies, but it did. I told him the recent story (Liars, Just Liars).

And that’s when I got his story. Shmulik and S. got a call. A Bedouin filed a complaint that “settlers” burned his sheep. They were duly disgusted. Torturing the innocent – whether human or animal, is not the Jewish way, not the Israeli way – despite what the Palestinians will tell you. They took the complaint seriously and went to investigate…and investigate they did.

It turns out – the Bedouin set a field of thorns on fire. It is an amazingly common way to clear a field and I’ve seen it many times here. The first time I saw it, I went running into an office telling them a field was on fire. The people inside got up to look, saw the hilltop on fire, said “it’s okay” and went back to work.

Sure enough, the fields burn themselves clear and then are replanted or whatever is required. In this case, the Bedouin miscalculated and the fire was driven with winds to surround his sheep and began burning them. Nearby settlers – yes, those people that have been maligned as evil occupiers by Arabs and the media, came to help. They put out the fire, were thanked, and left.

Then the Bedouin realized – Israel compensates for many violent acts. If your car is damaged by rock throwers – you’ll get it fixed at the State’s expense. If your house is damaged by a rocket. The State will come in and fix it. There’s an investigation to make sure you aren’t trying to steal from the State, and then it is fixed. So the Bedouin hoped Israel would pay for the sheep he had accidentally killed. The story of the settlers murdering his poor sheep was widely reported; the truth was not. 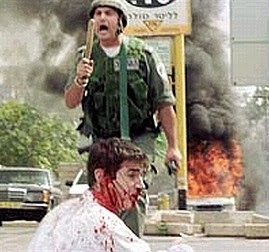 There is what is probably the most well known story – of a picture printed. What the New York Times and others told you that you were seeing…is a Palestinian boy on Jerusalem’s Temple Mount, being attacked by an Israeli policeman. The policeman looks vicious with his club, the boy is clearly battered and bloody.

What happened, in fact the young man was identified by his father, Dr. Aaron Grossman, who wrote to the New York Times demanding a retraction. The boy was not an “unidentified Palestinian” but a young Tuvia Grossman, who was learning in Israel. He was in a taxi with other boys when a mob of Palestinians surrounded the taxi, smashed its windows with rocks and grabbed Tuvia and the others and dragged them out.

As Tuvia was being beaten, an Israeli policeman approached, screaming for the Arabs to back off. This is the picture the New York Times published. It took several retractions before the New York Times finally got the story right, but the damage remained. A lie repeated over and over, Israel and Israelis condemned. The full story about Tuvia is written here (http://en.wikipedia.org/wiki/Tuvia_Grossman) and many other places.

I’m now in a debate with a young woman from Sweden. She says that Jews and Arabs are telling her different stories and she doesn’t know which to believe. “Why would they lie?” she asks me and I want to ask why she thinks they would tell her the truth. Ask them for names, I told her – names and not numbers.

I can give her names. Names that will break her heart and proof for all actions. A man wrote that we had bombed and killed 9 Palestinians on a Saturday afternoon and that is what began the recent “round” of violence. But they bombed Beersheva on Wednesday – and the 9 Palestinians were killed in two places. One was an Islamic Jihad training camp, the other was a rocket launching site eliminated seconds before they shot another rocket at Israel.

The one Israeli killed during this latest fighting was a 59-year-old father of four. He was driving his car, not shooting rockets or training in a terrorist camp. Our enemies win world opinion because they play the numbers game – nine dead is worse than one, isn’t it? They say the response from Israel’s accurate hits is not proportional to Hamas’ inaccurate “home-made” rockets – but the rockets aren’t home-made, and even if they aren’t accurate, they still kill, maim, destroy.

I guess – from Elie and Shmulik, from Tuvia and from others – we must learn to wait for the truth. Israelis didn’t trip the little Arab girl. Israelis didn’t burn the sheep. Israelis didn’t beat the boy. If only the Arabs could say the same about so many thousands of people and actions. Arabs did blow up the Sbarro Pizzeria – Ahlam Tamimi is proud of it, and Malki Roth and 7 other children (and 7 adults) died and 130 were wounded. Arabs did murder five members of the Fogel family and the Awad cousins from the village of Awarta are proud of their actions.

The details are in the names, not the numbers. When the world understands this and demands accountability – then, maybe, we will be closer to peace in the Middle East.

4 Comments on Shmulik, Sheep, and Stories