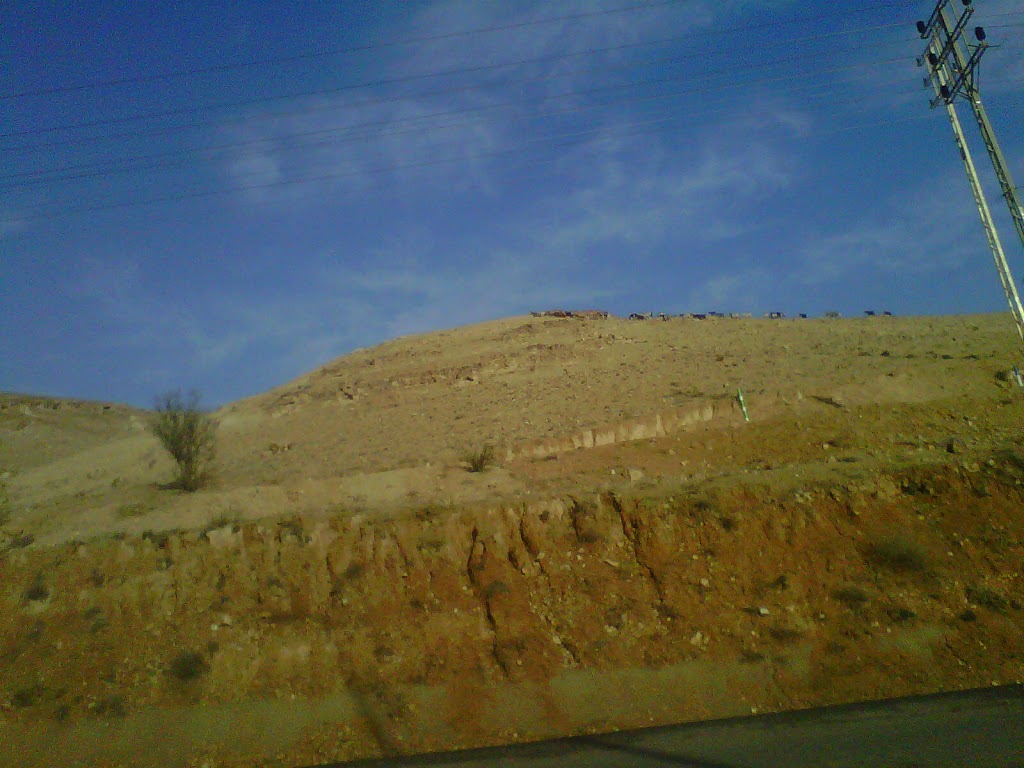 The more I hear about the world being enraged that we plan to build a small neighborhood on E1 while so much of the world is on fire with violence, the more confused and amazed I am. Egypt has tanks in their streets; Syria is murdering dozens of their own each day and threatening to use chemical weapons on them.

North Korea fired a long-range rocket that landed past the Philippines and neither Japan nor the US is particularly pleased.

Three were killed in a mall in Oregon when a gunman opened fire, the Greek economy is collapsing or has already collapsed, and so much more

…and yet, the world is obsessed about E1.

And, as I can see that mountain from my home, and as I drive past it every day, I am obsessed with capturing it in pictures.

It’s so silly really, and yet, each day, I snap a picture thinking maybe one more picture and the world will be convinced. Today as I drove past, I asked Elie to take some pictures. He hates my BlackBerry camera and complained…and yet, he captured what is there…and what is not.

It’s just a bunch of rocks and a road and yes, it’s beautiful because it is part of Israel, but there’s no big issue here.

No Palestinians live there, so none will be hurt.

The road on which I travel is called Route 1. It starts in Tel Aviv and continues to the east, climbing through the mountains into Jerusalem.

It crosses the northern points of Jerusalem and then continues down the mountain towards Maale Adumim.

At the bottom, it makes a curved turn and continues down, down, down – below sea level – down, down, to the lowest point on earth, the Dead Sea.

Today, I saw about 40 sheep grazing on the edge of the mountain – but honestly, they can graze on the next barren hilltop just as easily as on E1.

I look at E1 and I’m obsessed with taking that one picture that will convince the world that 100 dead in Syria is more pressing than this mountain – yes, even if we build on it.

That rocket from Korea deserves more attention than E1.

For God’s sake there are tanks in the streets of Cairo and nine people were wounded there this morning.

Did you know that Mali’s prime minister was arrested and has resigned?

Did you know Iranian warships have docked in Sudan?

That another bomb has exploded in a Somali neighborhood in Kenya?

What, for heaven’s sake, is so important about this silly little mountain across from my home? Why is the world obsessed with what isn’t there and, even if it were, would do no harm.

There is NOTHING there. Palestinians today drive on Route 1. They will be able to drive on Route 1 during any construction period and they will continue to drive there after those apartments are built. There is NO harm done. It is a barren hill that connects Jerusalem to the west with Maale Adumim to the east and I hope, deep in my heart, that perhaps some of my children will settle there, so close to my home. I hope they will build affordable houses for young families.

I know that if they build there, the homes will glisten in the sunlight, covered in Jerusalem stone. I know that there will be fine roads there, perhaps even a school. Some shopping nearby and roads to connect it to Jerusalem and Maale Adumim.

I have little doubt that many of the construction workers will be Palestinians, able to earn money for their families. They won’t object to building there; they’ll be happy for the work.

The only thing standing in the way is an obsession born of ignorance and exaggeration. Please, look at the pictures. There is NOTHING there to protest against. Nothing to be bothered. Nothing to be damaged.