My mother used to make this tuna corn fritter pancake thing that I always loved. It was the first thing I made my future husband shortly after I met him when I offered to make him some food. My kids were raised on it. They love it. Elie has always loved it.

Tonight, we were in the mall buying the last minute school supplies before my younger two children begin the new school year. Elie was hungry.

He has an intolerance to dairy products that kicks in when he overdoes it. A cup of milk, a piece of pizza, and he’s fine. A dairy Shabbat in which I make all of Elie’s favorites…and if he isn’t careful and take the lactose pill…his stomach bothers him. 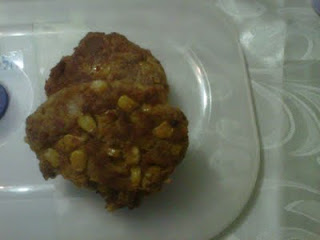 So, today, a few days later, his stomach is a bit unsettled. But he was hungry. We got home and he wanted food. We debated a few things and finally he asked for the corn fritters. I made that and a side dish; everyone ate. And then, Elie came down for more as I was beginning to pack it away.

“I’m taking the rest to work with me tomorrow,” I told Elie, knowing that I was kidding.

“Mine,” he said. And that’s when he gave me a lesson in Elie math.

“Whenever you make them,” he started, ” I get half. Last time, I didn’t get any.” And he still won’t let me live it down. “So this time, I should get all of them. But I’ll just take 3/4 for the next two times instead.”

I told him that Shmulik would be home soon from working as a security guard at the local mall and would be hungry. He said he’d come up for food. My husband hasn’t eaten either.

The last time, Elie wasn’t hungry; went upstairs and went to bed, and in the morning, there was none left. “Put some in a bag for me,” he asked as he took his second dinner off. So, I did. There are about 6 of them left in the box (and another 4 of them hiding in the draw).

And since I was asked once to post recipes of Elie’s favorite’s, here’s a picture and the how to…just don’t forget, I’m cooking for a bunch of people…you can probably scale this down some.

4 cans of tuna (I use StarKist chunky in water) – drain the cans
1 large can of corn (regular – not diet)
about 1.5 cups of crushed cornflakes – I’ve tried the ones with honey and that makes an interesting taste
about 5-6 eggs

Mix all the ingredients together – add more cornflakes or egg until you have a thick, sticky mixture that can be formed into thin pancakes (about 1.5 centimeters thick, less than 1/2 an inch).

Fry the pancakes in hot oil until browned on both sides – watch out – if the corn kernels break off – they sometimes “pop” and spray hot oil.

The picture above might have looked nicer … except as I was arranging them Elie grabbed one and took a bite! If you make them – let me know if you like it!