Elie and I had another of those amazing conversations in which more of his life as a soldier comes out, even now, almost a year after he left the standing army. It’s like a tapestry that he slowly reveals row by row before my eyes; it’s a complex model he slowly builds for me. I see glimpses at a time and want to hold on to it; only to have it slip away as he continues.

I say to myself – remember this one. Keep it. Share it. Sometimes, I know I can’t.

All of these vehicles can be found on the Internet, but I don’t think they should be there and so as Elie describes their strengths and weaknesses, I try to remember, knowing it is for me alone. There’s a picture Elie gave me months and months ago – of him sitting on a Humvee. “I can’t put this on the blog, can I?” I asked. 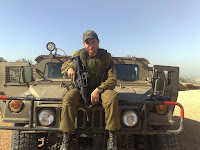 “No problem,” he answered.

“Sure, it’s the American Humvee, not the Israeli one.” Apparently, ours has been modified enough that it’s advisable not to show the difference, but the American one is allowed (and easily found already on the Internet).