I saw a most amazing play last night in Gush Etzion. If, at the end of this post, you want to have the honor of seeing this play…hurray to www.raiseyourspirits.org and order tickets fast. PS: This is a play by women and for women only. Men, you lose! Women…see this play!

Last night, I remembered again, how blessed we are as a people. The day started with the report that a Palestinian minister with high blood pressure and diabetes went to a demonstration, screamed and “allegedly” struck an Israeli soldier, then moved back, grabbed his chest, and collapsed. And then, as with the bus driver who committed suicide, the Palestinians decided to blame the Jews. Suicide and heart attacks are so less impressive to those 72 virgins, apparently. Through the early afternoon, I listened as Abbas and others began the spin to more violence…as if we haven’t had enough.

Depressed, tired, disgusted…I gave in to my 14-year-old’s request to go out to dinner with my older daughter and one daughter-in-law before going to a show…

Count the Stars, completely lived up to the name of the the cast that presented it – Raise Your Spirits.

The Raise Your Spirits cast is always professional, entertaining, talented, lovely, inspiring. It doesn’t matter what they are presenting – I’ve seen almost all of them, loved most of them. I didn’t even look to see what biblical story they had chosen – I just bought the tickets and waited for the day to arrive. 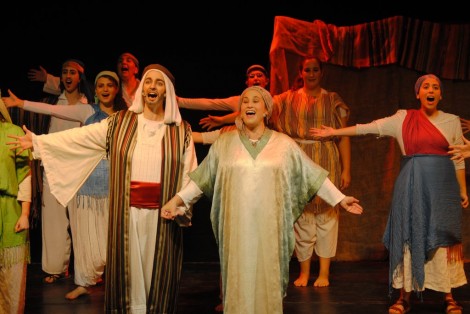 “The Journey of Avraham and Sara” said the program. This is the story of how we began as a people, of Abraham and Sarah…

Toby Klein Greenwald is one of the most talented women I have ever met. She is the brilliant director, and a major force in Raise Your Spirits.

Sharon Katz is another one near the top of the Most Talented Women I Know list. On stage, with 70 women and girls…she and the most amazing group of women bring you to tears, to smiles, to outright laughter, and back to tears. 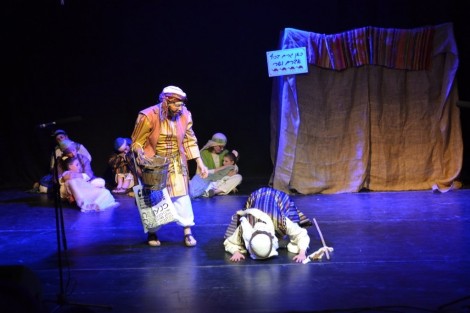 Toby started the play with an announcement that the performance was being offered in honor and memory…in memory of those killed in terror attacks, our brave and amazing soldiers who fell in the defense of our land. In honor of those who survive, their families…all of us, Israel.

And then, in minutes, the play began with a blend of color and music and excitement as the stage fills and the story begins. There is no end to the creativity of the script as Mesopotamia Idol (think American Idol) opens and “contestants” boast of what their idols can do. Into this, steps our forefather Abram, who admits to worshiping a God he has never seen.

As many tears…there were so many smiles…the singing is beautiful and though we know the story, we wait and watch it unfold before us. Sara gives up on ever having children…we feel her pain and desperation as she begs Hagar to be with her husband so that Sara will, through Hagar, have a child she can love and raise…and then with the wonder of the theater, minutes later, Hagar haughtily announces she is expecting Avram’s child…her child, not Sara’s. The audience laughs as Sara tells Avram this is his fault! 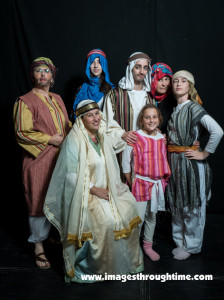 Barely a dry eye in the house as we watched Sara  finally cradle Yitzchak in her arms. I was so impressed by the role of Sara, as played by Rachel Moore. She sang to the baby (doll) in her arms, as only a proud mother can. And if you read the program, it will let you in on a secret – both Ishmael and the child Yitzchak at the end of the show are played by her daughters! I’ve known Rachel for a few years and never knew she had such a beautiful and powerful voice – almost for her alone, it would be worth seeing the play.

I don’t know Avital Macales, though I wish I did – she was simply amazing. Her voice, the sincerity with which she fought the world to convince others that we are never alone, always watched over by God.In the role of Avraham, she gave us an inkling of what an incredible human being our forefather must have been. And, as always Sharon Katz captured her role and took the audience for an incredible adventure. As the amazing Eliezer, she stood by Avraham as both servant and advisor and I can’t begin to tell you how many of the laughs we had were simply because of the expressions she conveyed as she took us through the play she co-authored with Avital.

There are so many laughs – I don’t want to ruin it by telling you them all but through the laughter there is also great pride. This is the story of where we came from, the man who stood against father and society to say that it is not logical that man could form god, that wood and stone are not divine.

One scene that brought me to tears was the moment when Avraham is blessed that his children and his children’s children will be as numerous as the stars in the heavens. Count the stars…Avraham is told, as the theater erupts with stars spinning around and around the room. 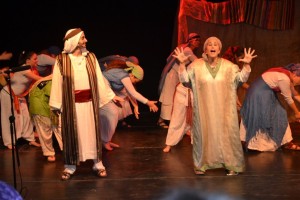 The play ends with  Sara and Avraham singing that Yitzchak is their star…and then the cast turns to the audience – we are the stars. All of us. Count the stars and know that we are blessed.

And if that isn’t enough to fill your eyes and your heart…as they always do, cast and audience rise at the end for the singing of Hatikvah – the hope of all that we have worked to build here…and Ani Ma’amin – I believe.