We got a call two days ago that my husband’s aunt had passed away in Canada. Her children would be flying to Israel briefly to bury her here in Jerusalem. We would meet them near a major intersection in Jerusalem and drive together in a chain of cars to the cemetery on the Mount of Olives, there to part with a much loved aunt. 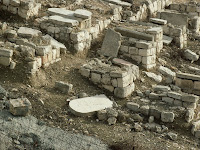 The Mount of Olives is an ancient cemetery, often desecrated by local Arabs. From 1948 – 1967, the Jordanians held this area. When it was reunited in 1967 with the rest of Jerusalem, Israelis and Jews the world over were horrified to find that the Arabs had broken uncountable numbers of tombstones, turned them into a latrine, and rubble. What harm these centuries of dead Jews had done to the Jordanians and local Arab population is beyond understanding but they were an affront to Islam, a testimony to our historical ties to this land and so were smashed, broken, and damaged beyond repair.

Slowly, for the last 40 years, we have been reclaiming, fixing, repairing new damage of ongoing vandalism and hatred, and burying our dead there once again. This was where our cousins chose to bury their father last year; where we came again in great sadness to now bury their mother. We saw many Arab youth working in the cemetery as we were leaving. They were laughing and playing tag as others worked with cement to repair some of the graves. There was no supervision; no one watching over them. Why? I asked Elie. It was not a respectful way to work in a cemetery in such an important place, but it was clearly for these Arab laborers, just a day’s work…and an unsupervised one at that.

“They break the stones at night,” Elie said, “and then we pay them to fix them.” And in the newly patched cement on some of the sides of the graves, I saw Arabic writing; even in this, there is disrespect. A marking of what is ours to somehow claim it as theirs. This too, goes without notice, apparently.

Before the funeral, we met the train of cars in a busy intersection of “West” Jerusalem, the modern, bustling city near our offices. We waited a short while and then began driving to the cemetery together.

On the way there, as we neared the Old City of Jerusalem and its ancient towering walls, a security jeep got in line at the end of the chain of cars. As we drove in what is commonly referred to as “East Jerusalem” by the media, we got stuck at a light, the train broken in half by the traffic light. The security jeep pulled up next to us and smiled reassuringly. The light changed and we continued; the security jeep pulled back to the rear of the trail. A few minutes later, we pulled up near one of the entrances to the cemetery. There are other entrances and we hesitated whether to turn in or not. The rest of the cars ahead of us were already out of site; the cars behind us waiting on our decision. The security jeep pulled next to us, signaled that we should follow, and lead us further down the road to the correct entrance.

We pulled in and exited the car; the two armed guards in the jeep exited and took up positions watching as the mourners walked up the mountainside following my husband’s aunt to her final resting place. Surrealistic that the guards were there; a testimony of the need for security even in death. The view from the Mount of Olives is stunning and beyond words. I didn’t take a picture today, but I’ll try to post one soon.

The ceremony was short and sad. Our cousins buried their father here not long ago, now they came for only a few hours, to bury their mother. She was an amazing woman, both in terms of how she lived her life and raised her children, but also in what she suffered to achieve it all. She was a survivor of the Nazi camps, of a horrible plan to rid Europe and the world of its Jews. It started in Germany, spread like the cancer it was to Poland and beyond. Relatively late in the war, it came to Hungary and to the Jews there. It came late, but it came with a vengeance and a determination that had been forged by years of hatred and murder.

They took my mother-in-law, her mother, her sisters. Her mother and young Gabriella were murdered. My mother-in-law and her older sister survived the initial selection. Kloty (her Hebrew name was Breindel, but everyone called her Kloty) had a problem with her hips. I think it was something that happened during her birth and so others hid her, afraid that Mengele would choose her for experimentation. No, I won’t give him the honor of calling him Dr., though he was a medical practitioner. To me, calling someone a doctor is more than just a recognition of having achieved a certain level of knowledge or learning.

So Mengele didn’t get his hands on Kloty, though even without this, she suffered all her life from the pain in her hips. She had operations. She had difficulties and yet she always had a smile whenever I saw her and a positive attitude. Someone tried to console Kloty’s daughter by reminding her that her mother had survived Hitler’s Holocaust. But, I told our cousin as I met her near her mother’s grave, that Kloty didn’t just survive the war. She lived. She chose life. She chose to build a family and live.

And now, she is gone and I am left with such sadness. My mother-in-law passed away more than 15-years-ago and still leaves a void in our lives. Her brother passed away a few years later, and now the last of that family is gone. Kloty was the oldest and it is hard to believe the day has come when they all are gone.

We still have aunts and uncles, thankfully, on my father-in-law’s side. For that matter, my husband still has his uncle’s wife on his mother’s side who is thankfully with us, but there was something about Kloty being here that kept a part of my mother-in-law alive for me too.

People are saying that the survivors are dying; the generation that could bear direct testimony to the horrors that man did inflict on man is almost gone. Those who survived were children at the time; and each year we get closer to that day when they will all be gone. For our family, today was one of those days.

With such great sadness, I realized as I returned to my office, they are leaving us and in their leaving, they are giving us a terrible and tremendous responsibility. They have carried the memory of what was done to them; they were haunted by it to the end of their days. They suffered in their health and fought to overcome. Now we have to remember. Now we have to remind the world.

May God bless Breindel bat Yishayahu with all the riches of the world to come and all the good things she deserved. May He comfort her children and all of us. We are losing a generation who defined grace and life and taught us that no matter what others will do to us, it is what we do ourselves that defines who we are. They taught us that to choose life is imperative, but more, to live life is a triumph.

3 Comments on A Generation Fading