Since his early years, Shmulik has always loved animals. It almost doesn’t matter what kind of animal. Birds, cats, dogs, rabbits. Even hamsters, guinea pigs, and snakes. We took him to the safari a year or two after we arrived in Israel – he was probably all of 4 or 5 years old. He loved watching the animals run as we slowly drove through the beautiful area, twisting lanes that led between the various enclosures. Lions lounging fascinated him; he loved the zebras and the deer.

At one point, in the deer area, we parked to watch the grace and beauty that is nature and the deer. We stayed parked on the side and watched as a young fawn slowly walked behind our car and stood in the middle of the road. Shmulik decided the baby deer was lost and didn’t know where his mother was. He insisted that we take the deer home with us so he wouldn’t be scared. We tried to explain to Shmulik that the deer’s mother would find him; that everything would be okay; that we could not take him home. Shmulik started to cry and cry.

When we first moved to Israel, Amira and Elie were scared of dogs. As someone who had grown up with dogs (more than I want to admit), I found this intolerable. A year after moving here, we got Sheba, a beautiful white and black dog. A year later, my sister called and told us that a dachshund had been abandoned on the side of the road, taken by a neighbor and nursed back to health. Sushi joined our family. 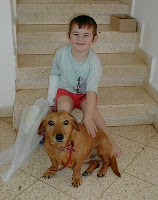 I doubt there has ever been a dog as gentle as Sushi. Several other families have offered to take her in the past. We went away on vacation one year and left her with loving friends for a week, only to learn that she was a tyrant. Little Sushi! I went to pick her up, astounded that she had been misbehaving. She ran to me when I saw her and would not leave me alone for a second. I put her in the front passenger seat and circled the car. She immediately crawled into the driver’s seat to be closer.

I pushed her back into the passenger seat and had to keep one hand on her, touching and petting her, all the way home. When Davidi was a toddler, he tormented Sushi. We told him to leave her alone, but he was terrible. One day, he was leaning over her. Sushi had had enough. She stood up and Davidi slipped off her. He looked at me, as if expecting me to give Sushi a hard time. I wanted to say, “Good Sushi!”

We’ve added cats at various points to our home, fish and birds. I think we had a hamster, but that was short-lived and against my wishes and eventually, we settled down to the 1 fish in Shmulik’s room, the 11 birds, including Coco the African Violet, beautiful Sheba who wasn’t very smart, and gentle Sushi. Sheba died about three years ago, after a long life and Shmulik missed her terribly. He asked us to get another dog.

We held out for a while; Sushi was getting old – already she was 12-13 years old so we decided to get a puppy. Simba joined our family and it was strange having a bouncing puppy, energetic, and full of action. Somehow, he knew to yield to Sushi and the two were often found cuddled together. More than once, Simba would stand by while Sushi ate his food (only later to go over and eat Sushi’s). Simba quickly learned how to open doors (literally) and stand on walls. When we moved to our new house about a year and a half ago, Simba delighted the neighbors by standing on the wall of the upper balcony, towering over the neighborhood.

I’m delaying so I guess I’ll get to the point.

Sushi died during the night and it is hard on all of us – harder perhaps, on Shmulik. When Sheba died, Shmulik came with us to the vet when it was clear she was suffering and in pain. We cried together outside while my husband stayed with Sheba as she slipped away. It is an agonizing decision to make and one that was even harder with Sushi.

In the end, there was no decision to make. For days, we have been giving her medicine, coaxing her to eat and weighing the decision. Yesterday, she was quieter and was refusing to eat. I gave her a few teaspoons of water – all she would take before going to bed. I was sure that today I would have to make a final decision and probably take her to the vet. I hated the idea.

In the end, she slipped away, gently in the night. It was Shmulik who helped me take care of the body. I couldn’t even bring myself to touch her to confirm she was gone. I called Elie. After years in the ambulance squad, he has sadly been around dead bodies. Elie is great with many things, but has never been a real animal lover. He’ll help when he has to, but is more than happy to be left alone.

I asked Shmulik for help, another sign that our relationship has reached this mutual stage where it is one between adults, rather than solely that of parent and child. Shmulik touched Sushi and finally covered her. His eyes filled with tears but he was amazingly gentle. As with Sheba, we cried together.

Sushi lived an amazingly long life – even for a dachshund. Aliza cried this morning before leaving for school. I told her that from my calculation, Sushi had lived at least 17 years. In dog years, she was at least 119 years old. According to Jewish tradition, a full life is 120 years. We don’t know exactly how old Sushi was. She was thrown away on the side of the road by some callous people when she had puppies. All her puppies died; Sushi was very ill when she was found. I don’t know what caused them to be so cruel, but I know their act of cruelty was a blessing for our family. 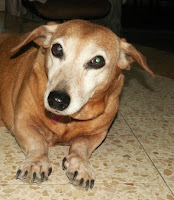 It could easily be that Sushi was a few months older than a vet assumed so many years ago. It is only those few months that stand between her and 120 years. Perhaps, God has granted her a perfect and full life of 120 years. Certainly, she gave me the gift of not having to decide and I know she did not suffer. She simply left our lives as she entered it, gently and sweetly. I know that from the time we got her, she was loved. She was warm and fed and had children to play with. She would often sleep outside our bedroom door. Just yesterday, Shmulik found her sleeping on the floor in my room and took her back to her bed to rest on a blanket. She always wanted to be near us. She had a full life, I told Aliza, and went as gently in death, as she lived her life. I can’t begin to explain how much we will miss her.

But I am comforted, or trying to be, by the very real truth that I don’t think you can ask for much more in life than what Sushi had (and what she gave us) – pure and simple love.

10 Comments on When the Heart is Sad