At the recent President’s Conference in Jerusalem – though Shimon Peres and others spoke about the dearth of women in professional life in Israel, few spoke about the amazing lack of women presenters at the conference. I counted only about a hand-full, perhaps a few more (one estimate I heard was that less than 10% of the presenters were women). There was Caroline Glick, who was amazing; Dr. Ruth who was entertaining. There was Keren Leibovitch who defines the word inspirational, and there was Ayaan Hirsi-Ali. 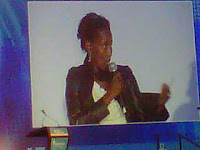 Ayaan is a 42-year-old woman who was born in Somalia. She is graceful, soft-spoken and beautiful. She came to the platform to speak and it was then you could see beyond the grace and the beauty is courage and intelligence. She explained that the first 20 years of her life were the complete opposite of the last 20 years. As a young Muslim child in Somalia, she learned three things that characterize that culture – the culture of Islam. She came to the microphone after Dennis Ross, former US ambassador to Israel. She spoke after two American Jews had been to the platform to offer their opinions and knowledge of the Israeli-Arab situation. The night before, Henry Kissinger, Shimon Peres and Tony Blair all spoke about peace as if tomorrow it will come…if only we want it badly enough.

Quietly, Ayaan spoke and without ever mentioning their names, she made these men sound like naive fools. She never said it, but it was there. You cannot make peace with a society that does not want it; you cannot compromise with a people who refuse to accept that you even exist. Dennis Ross suggested one of the steps that the Palestinians must take is to simply put Israel on their maps – even this, they will never do because this is about compromise and, according to Ayaan, an impossibility.

These are her words, her experiences. People have asked me if I believe there can be peace. If I were to be honest with them, until now, I would have told them no – there can be no peace. Instead, I typically answer “if the Arabs want it.” That part is true. If they want it…

There are three things that characterize Ayaan’s Muslim upbringing and the world that she knew. It is amazing that days later, I do not even have to consult my notes to remember. Such was the power of her words and the honesty of her opinion. These are:

1. Absolute authority – of her father, of her Imam, of her teacher, of her government. Absolute. No opportunity to question, no right to question. You do what they say, always. She did not. She refused the marriage they would have forced upon her and in so doing, she lost her culture, her community, her family – and she sees where she is now and accepts she is in a better place, despite what she had to sacrifice.

2. No compromise – never. To compromise is to lose face; to be a loser. To be the weak one. The Palestinians will never compromise was her message. At one point, as someone on the panel was suggesting ways towards peace, Ayaan said something. I’m sure I heard it and perhaps can find it on a video somewhere to confirm. I believe she said, “Even if you give them Jerusalem,” and then she repeated it, “even if you give them Jerusalem, there will be no peace.” No compromise.

3. All that is right is in the Koran – and by extension, whatever is not in the Koran, is wrong. This means not only absolute power to the figure of authority, but absolute control of every aspect of your life.

What this means for Israel, was the silent message from Ayaan, is that you are in the Middle East. Just as she grew up within that world, Israel must accept it is firmly planted here. Ayaan was lucky in that she was able to break away; our country can’t do that.

True opposition will never succeed in the Arab world – the election of the Muslim Brotherhood in Egypt is yet another proof of this. In breaking away from one tyranny, they have simply chosen another – even more fundamental, even more extreme. Absolute authority, no compromise, the Koran.

Even if you give up Jerusalem, even Jerusalem – there will be no peace. If you know anything about Israel, about how much we love Jerusalem, you will understand her message. She came to Jerusalem, recognizing it as our capital, recognizing our love of it. Even if you surrender this city that you love, this place that is your heart – even then, they won’t give you peace!

To come to the President’s Conference where half the sessions seemed to be dedicated to discussing tomorrow and the roads we should take towards this thing called peace, and essentially say you are dreamers, naive and perhaps even foolish – this was a bold and brave stand to take. I have little doubt that most of the male presenters lack the experience, the bravery and the boldness of this one woman.

They spoke of maps that lead nowhere, compromises that will bring nothing. They suggested, cajoled. insisted, opinionated. They want to push Israel because perhaps deep down they understand that they cannot push the Arabs – no compromise. It was the truth of Ayaan that I wish they had heard – even if you cut out all that we are, even if you give it all, even we listen to your foolishness, even if we give up Jerusalem, they will not let us live here in peace.

No, it wasn’t a message Peres would be ready to listen to; not a concept most of the other panelists would have been ready to hear but it was one woman’s voice, her story, her truth, her past and her future – and perhaps, just perhaps, Israel’s as well.

2 Comments on One Woman’s Voice and Story