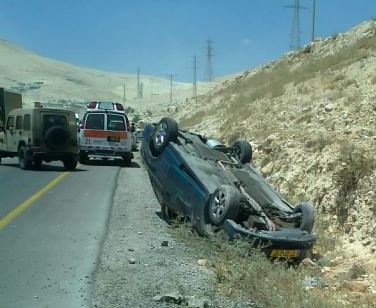 Davidi is in the part of the school year where he is studying hard for matriculation exams. The school gives them off the day before each of these exams and between that and other finals, he is home studying quite a bit. He’d rather be volunteering for the ambulance squad and so there’s a compromise – he takes his studying with him and in between calls (most of the time), he’s studying without many of the distractions at home. 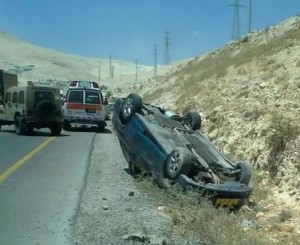 Each time he goes, I have to give him a signed permission note. They do not allow minors to miss school and so these parent notes ensure that the child (can you really call a 17-year-old who towers above you a child) doesn’t skip his studies.

So Davidi was there last week a few times, again on Friday and again today. I asked him if he studied when we spoke on the phone as he was on the way home. Yes, he answered, except for the one call.

I asked him if it was okay and he told me it was a car accident. I asked if anyone was hurt and he said there was a woman in the car but she wasn’t really hurt. Despite that, they decided to take her to the hospital.

Slowly, Davidi added details. It is a measure of the type of person he is and likely the man he is becoming, that the details came slowly. The woman was 10 weeks pregnant and though the paramedic didn’t find anything wrong, to be on the safe side, he decided to take her to the hospital.

The woman was also an Arab – so much for the charge of apartheid and discrimination against Israelis. She was treated with respect, she was cared for, she was taken to a hospital by Jewish medics and volunteers, to be treated by Jewish (and possibly Arab) doctors and nurses.

I asked Davidi how the accident happened. There have been a number of car accidents in Israel caused by rock throwing and even firebombs – but in this case, it was rather simple, “she took a left in the middle of the road,” Davidi said. She drove into the side of the road/mountain and flipped the car…and was exceedingly lucky.

Lucky that she wasn’t hurt, lucky that Davidi and the paramedic came within minutes to help her. Lucky that she lives in a country that values life and doesn’t discriminate. A pregnant woman needed help today – yes, she is an Arab – and she was quickly helped by Israelis. This accident won’t make the news; won’t be featured in CNN or BBC or the New York Times.