Does it begin with a video showing a decorated IDF Lt. Colonel beating anarchists in a clip that is quickly making its way around the world? Can you trust an organization who staged this to be the one to report on it as well? Doesn’t it matter at all if this was not the first strike, but the second?

When I was little, my sister went to my father and told him that I had hit her. He came and punished me. I explained that she had hit me. He went back to my sister and asked her if that was true. Apparently, she was much more honest than the people in the video, certainly more honest than the Dutch anarchist. She told my father, “yes, but she hit me back.”

It changes the picture, does it not? If the anarchist who now claims brutality – was in fact, brutalizing first. No?

So perhaps, the real story began long moments…even perhaps as long as two hours before that tiny, edited clip you’ll probably see on YouTube, Facebook and elsewhere? From the video that is being used to condemn him – comes the proof that these so-called humanitarian activists were anything but humanitarian, anything but peace-seeking, civilized demonstrators.

The truth will come out. Lt. Col. Shalom Eisner was attacked FIRST – they BROKE HIS FINGERS. Note the picture below – note his hand. This is a Lt. Colonel in the Israel army – tried and tested. Violence came at him and yes, he answered with violence. The key here is that he ANSWERED.

The truth here is that the “activists” went to one of Israel’s major highways and without coordinating the “demonstration” in advance – began blocking the road. The army moved in to clear the path – and were brutally attacked…by the so-called peace-loving ISM.

I will tell you that I believe the video they post is a challenge to each of you – a question they ask – how stupid are you, is their real message? Are you stupid enough to believe their headlines? “Israeli soldiers brutally attack Palestinians and ISM activists on bike ride.”

On a bike ride? Seriously?

Yes, they had bicycles – the better to disrupt traffic. Can you, from this brief clip, really condemn a Lt. Colonel doing his job compared to activists that came from abroad – like this Dutch man – fully intending to disrupt, disturb and incite violence? ISM activists have a long, blatantly anti-Israel history. They are pro-Palestinian activists (and that’s really too nice a word for them). You can see this in the flags they wave and the Arab headdresses they wave as a challenge and a declaration. Is peace really served by traveling to another country and waving someone else’s flag?

The clip they show is brutal and short. If you believe this is the sum total of their encounter, then, my friends, you surrender to the stupid. In fact, the few minutes you see have been carefully edited  – hours of confrontation have already taken place. Afterwards, the man is handcuffed and arrested and he’s clearly not injured. You cannot say the same of the Israeli soldier, a Lt. Colonel, pictured below.

He was attacked first – they broke his fingers. And yes, the Israeli army is looking into the incident to determine if there was wrong-doing, and by whom. No, there will not be a cover-up and if Lt. Colonel Shalom Eisner overstepped his authority, the army will deal with him appropriately. Hopefully, it will also deal with these activists. 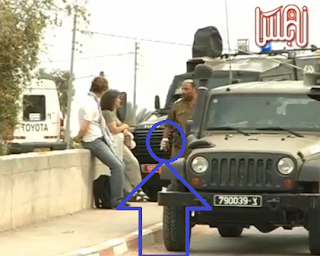 And to add a bit of perspective for today, for those of you not in Israel – especially those in the United States – imagine a group closely associated with enemies of your country – promising to come in through your airports and disrupt air traffic – on the day after Thanksgiving; the Sunday after a long Christmas week break. Do you have some twisted moral obligation to allow them to do this? Would you allow hundreds or thousands to disrupt the lives of tens of thousands of innocent people who just want to return home after vacation? That’s what we had here – tens, even hundreds of thousands of Israelis traveled abroad for the Passover break – and planned to return on Sunday – the day these anarchists picked to disrupt our country. Would your country allow this?
Israel made it clear to the flytilla “activists” – and again, worked hard with international connections to avoid violence. Of the promised hundreds, only 60 made it to Israel. Of the 60, 44 were detained while 13 were simply turned around and sent back – as promised in advance. If you travel to another country amid promises of bringing them to their knees on one of the busiest days of their year…do you really expect less than a full attempt to block you from success? That is what Israel did today – it successfully, and relatively peacefully, stopped an attempt to disrupt the lives of tens of thousands of people.

As for the Lt. Colonel – in his words:

I explained to the activists that many travelers were using the road because of the holiday and that they are posing a major security risk. All was calm and in control and that is why I didn’t bring a water canon and gave them 15 minutes to protest. It was a group of 60 activists and suddenly two buses arrived and the activists all together called to block the road while closing our barrier. One of the Palestinian organizers told me at this stage that she no longer had control over the event.The weapon was the only thing I had in my hands.

The whole thing lasted 60 seconds, we prevented them from getting on the road and they boarded the bus. Obviously, they didn’t show the part where they attacked us with sticks in the video. I should not have flung my weapon like that. But those are 60 seconds out of a two-hour event.

By the way – here is another picture from the same demonstration – note the knife. Since when do “peace activists” on a bike ride pull a knife?

For those who say this might be a cigarette in his hand – as a nonsmoker, I have to say I have never seen anyone hold a cigarette this way. I can’t be 100% sure and as with the lie above, I wouldn’t expect the demonstrator to be honest, but it looks like a knife; it is being held as a knife would be held. I think if it quacks like a duck – it probably is; and if it is being held as a knife…in this situation, it probably is… 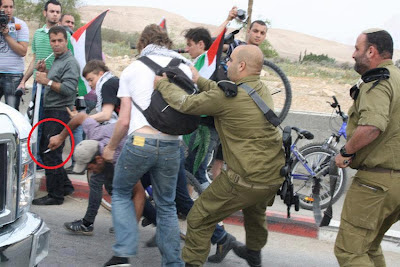