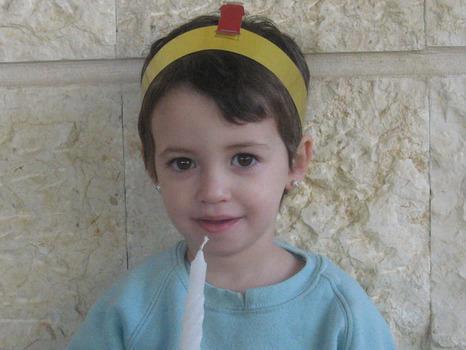 Sometimes, victims are nameless, faceless numbers. Not really in Israel, actually. We work very hard to give each person a face, each victim a moment of recognition.

Isn’t this a little cutie? Her name is Adele and she’s almost three years old. Last week, her mother was driving. Adele and her two sisters were in the car when Arabs stoned the car. Her mother lost control of the car and slammed into the back of a truck that had also been hit by stones.

Adele is more than just a victim; she’s a beautiful little girl who needs your prayers.

May God bless Adele bat Adva (Adele, daughter of Adva), with a complete recovery. All over Israel, all over the world, we are praying for her because we can’t let her be nameless, faceless.

And the next time someone dismisses Arab stone throwing mobs, please think of Adele who is fighting for her life…and of Yehuda Shoham (5 months old)…and little Yonatan Palmer (1 year old), both of whom were murdered  by Arabs who threw stones at their cars.