A while ago, the Israeli powers-that-be decided that it could improve safety on the roads if people felt they are accountable to someone else. So, they decreed that companies had to put signs on their cars with numbers to call if the driver was driving or behaving irresponsibly.

It’s a great idea – until the driver (or someone) does something like this: 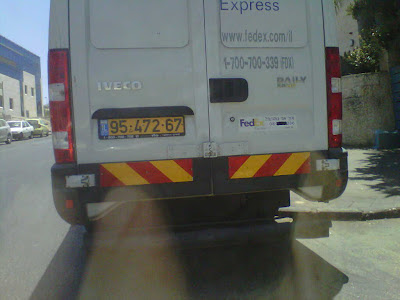 The FedEx truck was parked – partially on the sidewalk near our office building in Har Hotzvim, and partially blocking the exit from the parking garage. To get out, we had to go out through the “in” side.

As we did, trying to see if there was oncoming traffic (blocked by the FedEx truck), we noticed the sticker on the right side – beside the FedEx logo – are the Hebrew words “How am I driving?” and the beginning of a number and then…and then you can see that someone crossed out the numbers with a black marker or something similar.

As to what’s wrong with the picture? I’d say that it shows Federal Express violating the law because they have to provide a phone number that people can call to report dangerous driving. This happened today at around 1:30 p.m. in Har Hotzvim, Jerusalem – in case someone from Federal Express wants to track down the driver.