Ever wondered how to find a secret military base that is off-limits to civilians? Do you look on a map? Ask friends who served in the army? Set off in the general direction of the desert and start asking around? Well, that’s about what it comes down to, I thought, when Elie told me on Thursday that the army was allowing parents to visit their children the next day.

When I asked Elie if he could explain how to get there, he joked, “Look for the sign that says, ‘Secret Military Base'”. To make matters worse, Elie would not be available during the time we were driving. By my best calculations, it would take us about 3 hours to reach his base – in each direction. During that time, Elie would be in class/training and unable to take our phone calls. At noon, he was required to go eat lunch – that’s a 20 minute deal, leaving him 10 minutes to get to the front of the army base to meet us. At that point, he could call us… 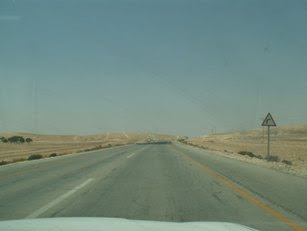 In the middle of the night, I woke up, thinking what I needed to bring him. He’d asked for the backgammon set that was too big to fit in the box I’d mailed last week and one other small item.

What else? Some gum, two bottles of frozen ice tea that he likes, the backgammon set, of course. The grapes looked good in the morning when I stopped in the store, and so I picked up a container. Saturday morning, the Jewish Sabbath, is a time in our home when we all (or at least the men, when I feel like being lazy) go to the synagogue. These mornings include a quick breakfast of sweet pastries to keep the hunger away until we return and eat lunch. I brought Elie a bag of these chocolate and cinnamon danishes as well. Because Elie told me he would have just finished lunch, I packed a few sandwiches for us, some bottles of cold water and a few other things and we were ready. 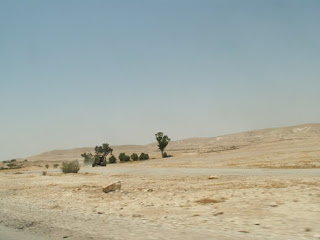 Because it was Friday morning and the Sabbath begins at sundown, I quickly prepared what I would serve for dinner and lunch on Saturday for the family (or part of it) and gave Shmulik a list of when to turn things over or turn things off.

We set out from Maaleh Adumim at around 10:15 – later than I’d planned. Still, we made good time, initially following the map in the general direction. We had some assistance. His base is located near some prominent archaeological ruins of the same name and so we figured, if we could arrive near there, Elie could help us (or we’d flag down some soldier…or perhaps just follow the loud booms?).

We took the major highway heading south, bypassed Beersheva, and continued heading deeper into the desert. We passed Bedouin encampments and signs that warned us that there might be camels on the road. We kept going, not completely sure we were headed in the right direction and each time we passed some military installation, I wondered if perhaps we’d gone wrong some where.

We took the left turn off the highway and immediately, the road’s quality started to deteriorate. We weren’t even sure if we were on the correct road, but about 2 minutes later, Elie called and we told him we’d just taken the turn. I could hear the happiness in his voice as he stayed on the phone and guided us the last mile or so.

“As soon as you take the next turn, I’ll see you,” he told us, and sure enough, with the next left turn, “I see you – just keep coming straight and you’ll come to me.” That was all I’d had in mind when he told me that we could visit – getting to him. His voice, at that moment, told me all I needed to know. He was fine. He was happy. We were right to take this time and drive to visit him. 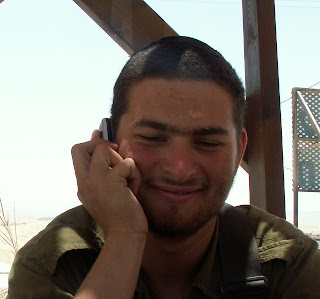 We spent a little over an hour with him before we had to make the long journey home. At one point, we called Elie’s grandmother and let them speak on the phone.

The base is in the middle of nowhere – hot, dusty, flies all around. We met Elie at the outer gate of the army base, and he directed us to a fenced in area just to the left. We sat down at an outdoor table and looked around. Elie pointed in one direction to show where they have camped out in the past, and in another direction to show where they have shooting practice. In the distance, we could hear artillery shells occasionally.

Elie explained about how his unit was responsible for guard duty this week and pointed to the various guard positions circling the area where we sat, and the much larger base nearby. Elie’s job over the weekend was to be “prepared” in case something happens. That means he must sleep with his boots on, ready to wake and run to whatever is required. We talked about what he was learning, the hours of study, the conditions.

He wasn’t sure if he should take the grapes, “they’ll just go bad.” I told him to take them and share them with the others in his tent. He smiled when he saw the pastries, “breakfast tomorrow,” he said happily. He still had cookies from one large container left (one of the two I’d mailed to him last week) and was very happy about the ice tea we brought. “I was going to buy some,” he told us.

We told him about the broken door lock on the car and how his younger sister had wanted to come visit today. We told him about how one brother was going to be a camp counselor this summer and another was going to attend the same camp. All the silly things you don’t have time to say on the telephone come rushing out in no particular order, to be spoken and quickly forgotten.

While we talked, other families arrived and each sat with their son at a separate table under shaded protection. It was hard to know who to feel sorrier for – the families that got there before their sons, or the sons who got there before their families. Both looked so forlorn at times and I again thought how lucky we were to have gotten so close to the base at the exact time Elie had been released and could meet us.

Each family had brought food, a ritual of comfort. Some families brought whole meals (even metal utensils and nice plastic dishes). Others brought the makings of sandwiches, cakes, and fruit. The soldiers snacked and talked and relaxed, waving to each other as they arrived, but more concerned to see their parents and siblings than anything else.

As it got later in the day, knowing we still had a long drive ahead of us, we took our leave. Judging by how many families came and the large visiting area set up around the base, it is clear to see that visiting your son in the army is yet another Israeli institution, another thing about the army we have learned.

All too soon, it was time to go. A quick hug and kiss and we were off. “I’ll see you next week,” Elie said as we waved goodbye. A few hours later, as we arrived home, Elie called us to wish us a peaceful Sabbath and thanked us for coming. The sound of his voice as we told him we had just taken the turn towards his base and would be there in a few minutes, and the thank you we received when he called us later all make the almost 6 hours of driving worth every minute. He’s very far physically, but it isn’t an insurmountable distance. This was the message we gave to Elie. As he learns what he has to learn and does what he has to do, he does it more easily and with less loneliness in his voice because he can reach out to his family and we’ll come to him when we are allowed to visit.

Oh, and the grapes were all gone by the time we got home.