The second thing that happened isn’t so much a thought as an acknowledgement of pride and more. I drove most of the day up north, around, etc. At the end of the day, Elie took the wheel and I sat in the back between Aliza and David.

As we passed the Sea of Galilee on the Golan side, cars began to slow in front of us and we could see a man waving a flashlight. It was an accident that had just occurred moments before. Elie unrolled the window, telling Lauren to hand him the red flashing light. He put it on the roof of the car as he rolled to the side.
“Ima, take the wheel,” he said as he got out of the car and reached in for the medic vest that is always perched on the seats of my car. Lauren was already climbing out of the car on her side.
I got out and moved to the front as Davidi called 101 (the equivalent of 911 in the States). He handed me the phone because he is less familiar with the area and didn’t know how to describe where we were. I explained about the accident and that there were people hurt. And then…then I did nothing. I stood by and watched as the accident played itself out.
Elie and Lauren were the first medics on site. Elie took one car; Lauren took the other. The one who was most hurt was initially stuck in the car; he’d driven his car from a side entrance to the main road, not seeing the oncoming car that smashed into his vehicle at high speed. 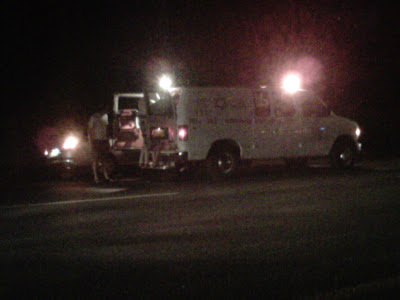 The family in the oncoming car was shaken but not hurt; the man in the other car was more severely injured. We were there for about an hour as an ambulance arrived and I saw Elie helping to move the injured man while Lauren was across the street sitting with the family, calming them and making sure they were okay.
Davidi put on a vest and went to help; listening as Elie ordered him and a group of volunteer police around the scene. A firetruck came but the first ambulance driver on site had already pulled the most injured man out of the car (not in a way that Elie would have condoned).
Essentially, there are two ways to handle the injury and the situation, according to Elie. The wrong way was to pull the guy out rather than wait for the firemen who are trained in this. Once he was on his way to the hospital, there was another wait until the second ambulance came and took the family.
When we first left the beach where we’d had our barbecue, our GPS told us we’d be home around 10:00 p.m. – by the time we were on our way, the new estimate was after 11:00 p.m. As Elie drove home, he and Lauren spoke quietly in the front while I saw in the back, once again between Aliza and Davidi. Aliza was tired and cranky and put her head on my shoulder to sleep. A while later, Davidi put his head down on my other shoulder and I have to tell you, I was delighted. I used to love when my children fell asleep in my arms. As they got older, each time I would wonder if this would be the last time – so, they weren’t sitting on my lap (considering that Davidi towers above me and Aliza’s just a few inches shorter), but it was nice.
So, our vacation day in the north included so much. First, a day shared with thousands of Israelis – Arab and Jew; second a reminder that even when we escape for a day, we sometimes take our nightmares with us. And finally, a sense of pride that my children (Elie, Lauren (hey, she’s mine too), and David) didn’t hesitate for even a second when they were needed. One second, we were driving along; the next, they were out of my car, crossing a dark highway to help people who were injured.
Vacation in Israel…as August draws to a close.