For many years, Israelis cities have been pounded by rockets and mortars fired from Gaza. We’re talking close to 15,000 of these “projectiles” fired primarily at Israeli civilians. There have been numerous deaths, injuries and millions of dollars in damage. Israel has repeatedly complained to the UN, which remains, by and large, silent to this atrocity.

When Israel locates the source of the fire and takes action, Palestinians and their supporters speak of martyrs and “victims” – ignoring what those “militants” were doing at the time they died. This past week, Syria shot a mortar into Turkey, killing a mother and some of her children. The Turks were enraged. They complained to the UN, which immediately condemned the attack.

That wasn’t enough for the Turks – they opened fire on Syria. Their right, they claim – to defend their land. Gee, what a concept…and what hypocrisy!

Thanks to Mideast Truth for this one! 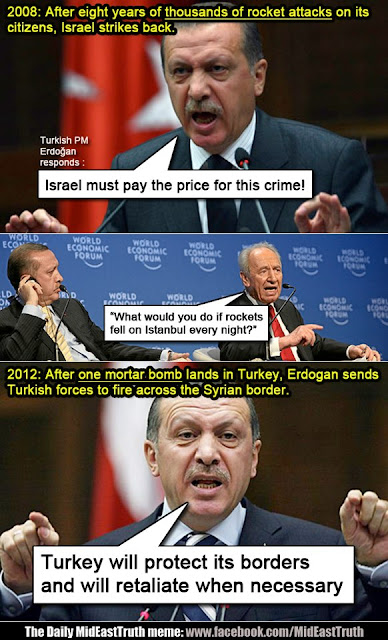