For most of my life, I’ve thought of tradition as those things that our parents hand down to us. For the most part, my parents didn’t really have religious traditions that I inherited beyond those that are generic to the Jewish people. I’m sure there are some; I just can’t think of them.

By contrast, my husband’s family has so many traditions; we call them minchagim – or customs. Some are accepted as a standard minchag of many; others are specific to his family (though I’m sure others have this tradition as well). For example, my husband’s mother (z”l – of blessed memory) made potato kugel every week. You could call it a potato casserole, but kugel just seems to fit it better.

She taught me how to make it and I am forever grateful. She described it in so many steps – and I wondered if all were necessary to create the wonderful, creamy, pre-Shabbat treat that everyone loved. The tradition wasn’t just to make it, but to eat it Friday afternoon during the afternoon hours when you are hungry. You don’t want to eat a big meal – as dinner will be large and festive. So – potato kugel.

I listened to my mother-in-law’s recipe and thought how much work it took. It was all done by hand, rather than with a food processor. There were steps and steps and methods and methods and I wondered if I could simplify it and still get the same taste. And so began a quest to see, to test. 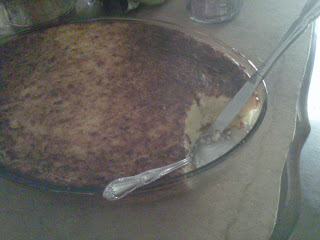 In the end, there were many things I didn’t need to do – but the hardest part, hand grating, was not something that I have succeeded, at least this far, in replacing. At first I would make the potato kugel once in a while. For months now, perhaps even longer, I make it almost every week and miss it when I don’t. When Davidi is home, I get him to grate the potatoes. Otherwise, I do it – which isn’t easy, given problems I’ve been having with my right arm.

It’s a simple, basic recipe – the more you try to get fancy, the more is taken away from the simple, good taste.

She made it every week. Many were the times we arrived late Friday afternoon to the amazing taste of the creamy, warm dish. Somehow, it has now become a tradition in my home as well. Elie fights for the end piece – he loves the crust. David could eat almost half of it, if we let him.

So, off to make it again.