There go those circles again – those little bits of coincidence that show you that nothing in life is really a coincidence. On November 9th, 1938, the Germans launched a wave of anti-Semitic attacks against its Jews. It was not the first and certainly not the last, but it represented that critical moment when Hitler’s plan could no longer be denied.

Jewish businesses were attacked and set on fire; books were burned and worst of all, of course, was the murder of at least 91 Jews.

I was born on November 9th, many years later carrying the weight of that day all my life. I didn’t know, until today, that on that same day in 1946, the Hagannah, the predecessors of today’s Israeli army, bought a ship called the President Warfield. 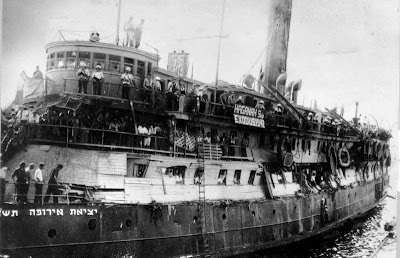 The President Warfield was refitted and renamed and given a purpose. The new name was the SS. Exodus and the purpose was to carry 4,515 Jews, mostly survivors of the Holocaust to the land of Israel. Israel at that time was called Palestine and the British, hoping to maintain some sort of balance between a promise they made in 1917 and another promise they made later; a compromise between giving the land to the Jews and giving it to the Arabs.

Their response was the White Paper, a document and a practice that involved blocking entry to Jews. Perhaps the Hagannah knew that war was inevitable; that the Arabs would not accept a Jewish presence in Palestine. Perhaps they knew. But without question, what was clear in those days was that the Jews needed a home, the only home they had ever known – the land of Israel.

The SS Exodus set sail on July 11, 1947 – 65 years ago today. From the start, they knew they were on a collision course with the British army and new it was a battle that they could not win. The trip was to have taken 2 weeks. Several babies were born during the short voyage. One woman…Paula…and isn’t that another coincidence (Paula Abramowitz) died in childbirth, her infant son died a few weeks later in Haifa. Three people – a crew member and two passengers, were killed by the British when they fired on the ship.

The British refused to allow the passengers entry to Palestine; ultimately forcing the ship to France. The passengers refused to disembark in France, demanding they be taken back to Palestine. The British decided, in an irony that still stabs me in the heart, that the only place to take the Jewish passengers – was to Germany. Even a British diplomat was smart enough to realize the idiocy of this decision as he wrote to his superiors:

You will realize that an announcement of decision to send immigrants back to Germany will produce violent hostile outburst in the press. The pros and cons of keeping the Exodus immigrants in camps … there is one point that should be kept in mind. Our opponents in France, and I dare say in other countries, have made great play with the fact that these immigrants were being kept behind barbed wire, in concentration camps and guarded by Germans.

If we decide it is convenient not to keep them in camps any longer, I suggest that we should make some play that we are releasing them from all restraint of this kind in accordance with their wishes and that they were only put in such accommodation for the preliminary necessities of screening and maintenance.

The legacy of the Exodus, captured by Leon Uris in his book, changed many lives – including my own. The stand taken aboard the Exodus was a response to a world that didn’t even realize a question had been asked; it was a demand, to a world that had forgotten Jews had a right to demand.

Decades after the ship was sent back to Germany, I read the story and it changed my life. It sent me on a journey to learn about Israel, about the Holocaust, about my people’s history, and ultimately, about myself and my place in this world. It was the first time I learned that such a people existed – beaten and humiliated, starved and persecuted – these people crossed a continent and let nothing stop them to come and help build the land of their forefathers. These survivors came here to make their stand, to tell the world that there was simply no other place for a Jew, here, in Israel.

On July 11, 1947, the Exodus began its journey. Some of those Jews never made it home. The British stopped the Exodus and refused to let the refugees of Nazi Germany disembark in Palestine. By force, all were sent back to Germany. For most of them, Holocaust survivors, there was no worse place on earth, no more devastating end to the journey they’d hoped would end in their finding their peace, in their piece of the earth.

Today, another Exodus story occurred. Yesterday, 229 Jews left the United States on a special flight organized by Nefesh b’Nefesh and the State of Israel. Of those on board, 99 were children. There were 38 families – and 59 singles. The oldest person on the flight is 86 years old, the youngest, only 6 months old. No one stopped them before they could touch down on Israeli soil. They didn’t meet British troops who stopped them; but Israeli soldiers who welcomed them. Government officials praised them; people sang and laughed and cried in joy.

Sixty-five years ago, more than four thousand Jews tasted the bitterness of defeat; it would take some of them years to finally come to Israel, and some never did. Today, our joy is there for all the world to see. The ceremony at the airport, attended by thousands, ended as it always does, with the singing of Hatikva – Israel’s national anthem – The Hope. We have fulfilled the dream of those on the Exodus – to be a free people in the land of Zion and Jerusalem.

Welcome home to our newest citizens – may the bravery and the yearning to be free that was within the passengers aboard the Exodus remain as a shining light as you make your way into this land.