Of all the countries in the world, it seems the one I am least able to understand is Germany. I can’t tell you when I determined that nothing I own would be German – not my cars, not my appliances, and sure as hell, not my ovens. I cringe at the thought that any Jew could buy a German oven.

When I say this out loud, people tell me I am wrong to blame today’s Germans for what was done 70 years ago. For a while, I laid this on my in-laws. So long as they lived, I would not bring something German into my house. Davidi is named for my father-in-law; he was born a year after we lost my husband’s father. Aliza is named after my mother-in-law; she was born five years after we lost my husband’s mother.

I can laugh off criticism of Israel from England and France. I think they have enough problems in their own countries without trying to interfere in mine. It annoys me that they run to condemn us for building houses on empty mountains next to the capital of our country. I see that mountain every day of my life – there is nothing there; no Palestinian homes – at most, a few Bedouins sometimes graze their sheep there before returning down the mountain to their camps.

But there is something about Germany that simply infuriates me. I know you want to take your place among nations; I know you want people to move on and recognize you for the power you are and not the misery that was.

I read that Britain and France are considering sanctions against Israel…and I am astounded – for building on a hill? I want to ask them. My voice in my mind even takes on a British accent as I say that last line. For building on a hill? Tell me, did I miss it when Britain and France applied sanctions against Hamas and Gaza for firing thousands of rockets into our cities? Sure, they condemned the last bus explosion in Tel Aviv – the one for which Hamas claimed responsibility…but did they actually DO anything?

And I think of the struggle I have inside of me to move beyond, to allow the Germans their future, untainted by their past. I long for the day that I will buy something German and not feel that I have betrayed the memories of 6 million and broken a promise to those who survived. And as I hear Germany speak of morality, my stomach turns and I know that day is not today. No, Germany – you have no right to dare to council us on where we build our homes. It is an abomination from a land that built not homes but gas chambers. 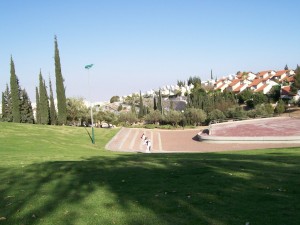 Russia and Sweden have expressed their “concern” too. Gee, I think I missed their concern when I was running to the bomb shelter two weeks ago. So, I look at that mountain across from me. It is barren, but for the large police station Israel has built there.

For this, Germany, France and England will condemn us. People will say we steal Palestinian land and yet, interestingly enough, the land is today as it was for generations, even hundreds of years. Barren, empty, waiting. It waits for us to come home – and look what happens when we do.

The land waits for us – to make the desert bloom. We have, we are, we will…our land.