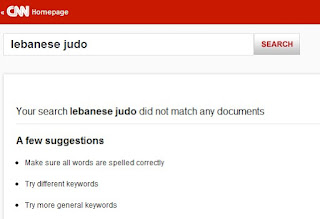 If you buy into the concept that news is not news unless it is covered by the major media players, than I guess the fact that the Lebanese judo team refused to practice next to the Israeli team until the Olympic organizers erected barriers to divide the room and place the Israelis out of sight…wasn’t news.

After all, a quick review of CNN and the New York Times came up with nothing about this story. That’s right – the search turned up nothing.

Guess it wasn’t news enough after all, no one was massacred other than the Olympic spirit.

BBC, on the other hand, did choose to cover the story – in typical BBC fashion. You have to hand it to them – I can’t help but wonder how long it took them to come up with a headlines that would imply somehow that the Israelis are to blame. 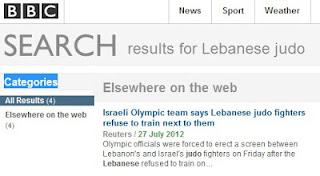 Logically, one would assume that the Lebanese went to the Olympic officials. Judging by the incredible bravery of the Olympic officials in caving in to every demand of the Arab nations – not wanting to insult them by honoring the murdered ISRAELI athletes, etc. etc. – one would assume they quickly built the demanded screens based on the Lebanese request. So what exactly did the Israelis do in this?…Ah yes, perhaps they were the ones who refused to remain silent at having, yet again, Arabs murder the Olympic spirit.

That’s right – thankfully, no Israeli lives have been lost at the Olympics, but the Olympic spirit took another beating as the Olympic officials gave in and allowed this apartheid wall to be built. No wait, that isn’t quite accurate – they didn’t ALLOW it to be built…they built it.

So, once again – BBC can’t take all the glory in the shame. This one must be shared jointly – with CNN and the New York Times for not covering the story at all, and with the Olympic organizers who once again caved in to the twisted logic that allows the Palestinians to say holding a moment of silence for the Israelis murdered by Palestinian terrorists is racism but building a wall between the Lebanese and the Israelis is acceptable.

Olympic spirit? Brotherhood of sports? Unity among nations? What a farce!

Oh, and here are those Olympic barriers – note the logo on the back of the worker’s t-shirt. The symbol of the Olympics – building bridges…I mean barriers…between nations … yup, what a farce! 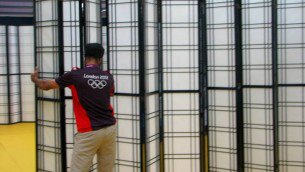