There are images that break your heart. The news is filled with them today and they can easily sway you to think that all of the situation in the Middle East comes down to a picture. How horrible, truly tragic, unacceptable and wrong it is to have a child die.

It is so horrible, sometimes you forget to look behind the picture. It’s so simple, really. A child should be able to go to school and be safe. I last spoke to my son days ago and in the background I could hear the sound of explosions. Through the phone, dozens of kilometers away from me, and quite a distance from Elie, I could hear another unit firing. Can you imagine how loud that would be up close?

Yesterday, mortars were fired FROM the school In Jebalya. This was a direct and intentional attack on Israel, on Israel’s soldiers and population. Mortars are explosions. They are loud. You can’t pretend you didn’t hear them. Many months ago, I went to a ceremony on a base where Elie had completed his basic training. Part of the ceremony included Elie’s group showing their parents what they had learned. After the awards and the talking, some of the soldiers ran to the armored personnel vehicles, while others, including Elie sat on the ground and watched. An officer came near me, as I stood watching with my youngest daughter. He told me to sit down with the girl “on your lap.” So, we sat down, as the soldiers were doing. As another officer was explaining to the crowd about the types of explosives that would be fired, where they would be targeting (the hill a few kilometers in the distance), etc. I saw the soldiers stick their fingers in their ears.

I thought to myself – they’ve been doing this – they know. So I told my daughter to do the same…quickly. She did, and so did I. Except – then I couldn’t hear the explanation and so I uncovered my ears. Now, I’ve lived in Israel more than 15 years, but there is still sometimes a delay factor in my Hebrew comprehension. Now they are going to fire…took me too long and so, I heard and felt the BOOM as the cannons fired.

Everyone in that building yesterday KNEW that the school was being used as a launching ground…and yet, apparently not one of those thought it would be a smart thing to leave. That seems strange to me, unnatural. I was once in Jerusalem, walking with by two daughters when something “exploded” ahead of me. Everyone around me stopped, as I did. It was a bus hitting something that went flying in the air and crashed loudly into something else. People began to move and yet I stood there, unsure what to do. It should be both human instinct and parental instinct to move away from danger.

And the people who now mourn the “innocents” who died in yesterday’s attack on the United Nations school don’t question why people remained in the building from which these weapons were fired. They don’t question that this defies human instinct and certainly what should have been every parent’s first reaction. The people in the school died for three simple reasons:

1. Palestinians decided to use the United Nations school as a launching base to attack innocent civilians. This wasn’t the first time they had used the school. Months ago, Israel filed a formal complaint to the United Nations. Clearly, nothing was done to stop this abuse and so we come to reason # 2.

3. The families and parents. I heard a father mourning the death of his son. He blames the Israeli government, and I blame him. “Are you insane?” I want to ask him. “How could you allow your son to be near mortars being fired? What did you think Israel was going to do?” Why didn’t you take your son? Why didn’t you behave responsibly? It was YOUR job to protect him; to love him enough to keep him safe and it doesn’t take a genious to figure out leaving your son in a building from which mortars are being fired in the middle of a war is negligent, stupid, insane, and so so wrong. How could Israel have known that there were people in the building? All they could know is that mortars were being fired from that location. My son is stationed far from the cities. Why? Because if he is a target, we don’t want civilians nearby. We do not hide in hospitals, in schools, in homes. Why, why do the Palestinians? And if they do, why, why does the world blame Israel?

People will ask how it is that I don’t blame Israel and the answer is simple. Fire came from that building. Call it what you want – a school, a refuge, a mosque, a home…if you shoot at an enemy…common sense would say the enemy will shoot back. Do it from inside a mosque, and the mosque becomes a target. Do it from inside a school, and the school becomes a target. Do it from behind your citizens and families, and you show the true nature of your society, your culture, your cause.

These are the images they show:

These are the images they DON’T show: 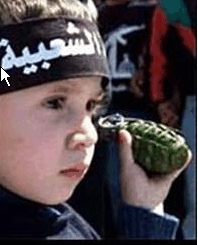 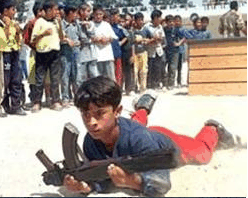 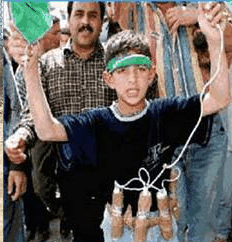 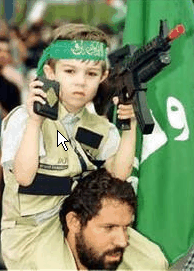 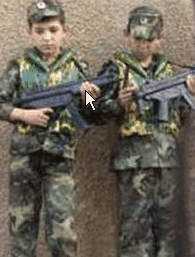 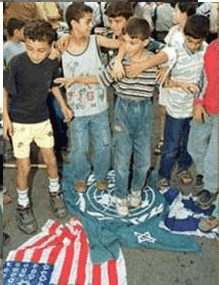 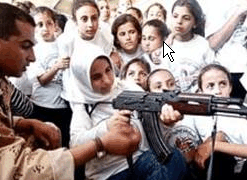 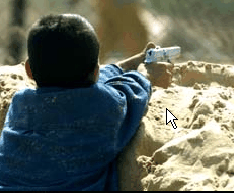 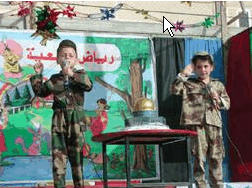 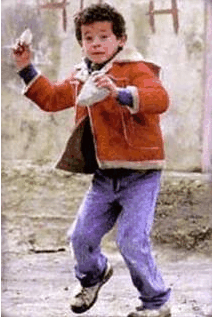 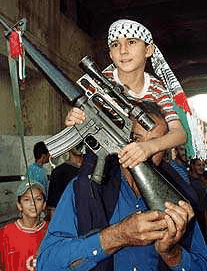 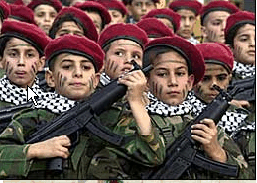 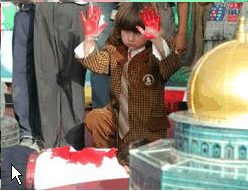 And what they forget to tell you – is the people who allowed these many pictures to happen, the ones who posed these children with guns, painted their hands with “blood” and strapped “explosive belts” to their bodies, the ones who raise them to believe death should be attained for the glory of God and the more Jews and heathens and infidels you take with you, the higher your place in Heaven – they are the ones responsible for the horror that happened yesterday because they are the ones who put hundreds of people into a place that should have been a sanctuary and then they turned it into a launching ground.