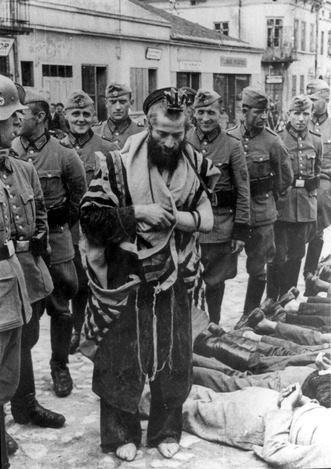 When I look at this picture, I see three components. There are the bodies of the prisoners lying on the ground. I suppose to be accurate, I can’t confirm that they are dead or alive but clearly, they pose no threat to these Nazi soldiers.

There is the Jewish man, his cheekbones proclaiming how thin he is. He is standing facing away from those lying on the ground. He seems to be deep in prayer. He seems oblivious to the Nazi soldiers behind him. They are nothing, he says to his God, nothing. All is before me; all is what You give me. I am here to serve You.

And there are the Nazi soldiers, the smirks on two of the faces. These are the faces I see. There is one in the back looking at the bodies. I like to think that if there was any humanity in those German soldiers, it can be seen in his face.

We will not forget – not the bodies, not the man praying barefoot perhaps moments before further indecencies were committed.

And there are the faces of the soldiers – I believe those on the ground have been granted their heaven, as has the praying man who stood before his God. I have no doubt that those Nazis soldiers will spend all of eternity in the fires of hell, hotter and far worse than the hell they created on this earth.

We Jews are not smirking now – that is not our way, but I believe, with complete certainty, that they aren’t smirking either, nor will they ever again.

After writing the above, I learned the story of this man, this Rabbi. It answered the questions that I felt in my heart. The pain is even worse; the anger just a bit deeper. They destroyed his tefillin – the  prayer box he wears on his head and the straps on his arm. They are about to kill the people beside him – but by the time they do, the Rabbi knows he will be dead too and so he asked the Nazis to be allowed to say Kaddish – the prayer for the dead. He will say it over the living…who, like him, will soon be dead…

This man is a rabbi who is about to be shot. He has asked to say Kaddish, the prayer that sanctifies both G-d and the dead together. The Nazis are smiling before they murder. They are simply unable to understand that the man has chosen how he is going to die; that this is his resistance. In the end the Nazis lost; an Israeli is sharing this with you.

And another posted it as well:

The Rabbi that you see in the picture was about to be shot by the nazis (yemach shmem – may their names be cursed/erased), but he asked to read the Kaddish prayer for all the Jews, who were still alive next to him, which is forbidden in Jewish Law – as it is for the dead, not the living. You can see the despicable nazi soldiers smiling behind him as he awaits his fate. If you look at his tefillin it has also been desecrated, so they could mock and humiliate the Rabbi further. This is pure evil that you are looking at, there is nothing else to say.

THEY NEVER BROKE HIM!