A long time ago…perhaps not that LONG ago, but a life time in many ways, I boarded an El Al plane with two little boys. We had packed and shipped the contents of much of our life together, first as a young couple, than as parents with three small children. My husband and daughter had already flown to Israel to start our new life; he would start working, she would start learning the language to more easily integrate into the third grade.

I had Elie, who had just turned six, and Shmulik who was three and a half. I’d made the decision not to toilet train him, afraid that as the plane was taking off, he’d need to use the rest rooms. A few more months wouldn’t make the difference, but a 10 hour flight with two small boys was looming. on the aisle with Shmulik next to me; Elie had the window seat.

I was exhausted, nervous, tense, excited, frantic, worried. I was an emotional wreck having been alone with the boys for six weeks already as I packed and longed to join my husband. Shmulik fell asleep even before the plane had finished its climb into the sky and slept for most of the journey. I had worried about how I would handle the boys on the plane…I soon found myself lonely and wishing they were awake to keep me company.

Nowadays, each summer, hundreds of families move to make their homes in Israel. It has become so much more accepted than it was when we came. There was no great ceremony but my husband met me at the airport with flowers and that was all that I ever needed. We went home to a house he had rented, put our children to bed and part time difference, part over-exhaustion, part exhilaration, I stood for hours on the balcony just staring at Israel long after my husband and children had gone to sleep. I’ve come home, I spoke to the hills. And look what I have brought you. My dream…their reality.

For the first year we were here, Shmulik spoke no Hebrew. Not a word. He went to nursery school (called Gan here) and silently watched. He played with the others. “He understands everything,” his teachers were quick to tell me and yet I longed to hear him speak.

Elie and Amira quickly grasped the language. Shmulik remained silent. The second year, he continued in silence and I couldn’t stand it. I know he understands, I told the teacher, but I want him to speak. She agreed with me…and each time he pointed, she would look at him and tell him that if he wanted something, he had to tell her. And he did – in whole sentences, in perfect Hebrew.

Within a few years, he refused to speak English. “Tell me in English,” I would encourage him and he would respond, “never mind.”

I gave up on the English. I wasn’t going to lose communication with my son over a language issue, I told my husband. And for years, though he understood English, he barely spoke it in our home.

We moved to Maale Adumim when he was in 6th grade. He met new friends, great friends and somehow among there were more English speakers and so his English returned. He is fluent in both languages.

Why this journey into the past? Because yesterday was one of those moments when you think not just of the present, but of what came before. Shmulik took part in his Tekes Hashba’a. The Swearing-in Ceremony where he formally received his gun and a Bible. These are the symbols of this ceremony – a gun with which he will protect, and the Bible, a symbol of our covenant with God and the land He promised to us.

They stood there – strong and proud. They promised to protect the State of Israel; the army promised to watch over them. They made this promise in a place like no other in the world; a place holy to our people, our nation. I watched as my baby stood there proud and tall and all that I have wanted him to be.

This moment was my dream….and it is his reality. The soldiers of March, 2010 – Kfir Brigade: 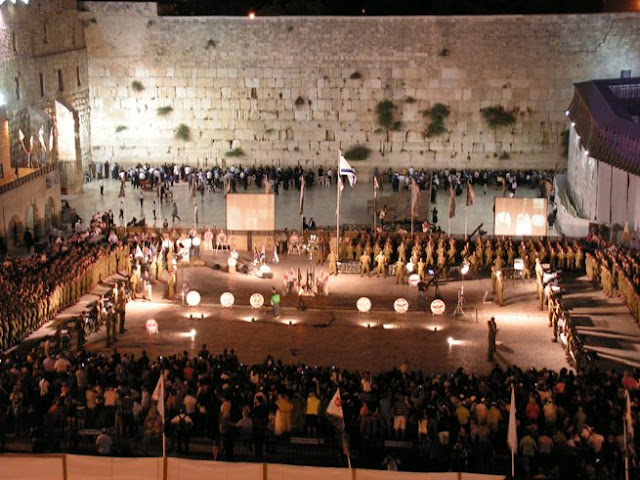 5 Comments on The Dream Comes to Me….

Leave a Reply to A Soldier's Mother Cancel reply