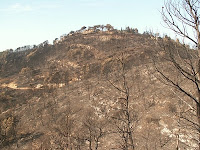 I’ve traveled the Beit Oren road many times. My parents “discovered it” and described its winding beauty. It isn’t about speed on this road, but about scenery.

It winds up the mountain, turns, twists, and with each turn, there is…was…will be beauty. As soon as I heard about the fire, I thought of the road and the places I have passed there. 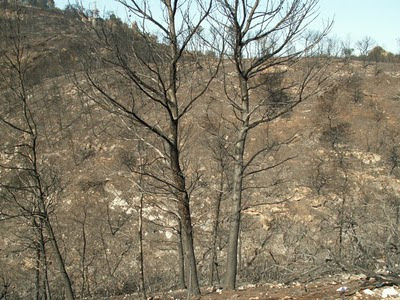 Beit Oren, the prison, the horses…I knew the places, the turns in the road. And when the fire was out, it called to me and so I stole a day. That’s what I call it when I just need to go off and be away. I can’t explain why I thought I might be alone there, to drive and to mourn, but I think, perhaps, that maybe I did. 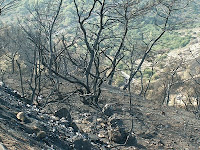 And as we turned up the road, it was so clear, that other Israelis had heard the call of the Carmel. This road is usually close to deserted; the young and those in a rush prefer the coast road. Almost any road is faster.

And no one who took the road with us yesterday was in a rush.
They…like I…had come to see, to feel, to mourn. Many were on the sides taking pictures; staring off into the burned forests. 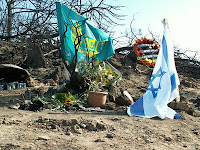 A few were walking amid the trees, though the nature agencies had asked people not to. Don’t walk there, they said, because if the roots live, they might yet grow.

We stopped on the side where the bus had burned, where so many had died. There were dozens, perhaps more, candles that had been lit there, a wreathe of mourning, an Israeli flag. A piece of the bus. 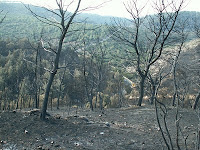 The firefighter’s flag or perhaps the prison division. I don’t really know. More than a dozen cars were stopped. The police came and gently asked people to move their cars more to the side.

It is a dangerous turn, limited in room and visibility – enough to have prevented the bus from being able to turn and escape. 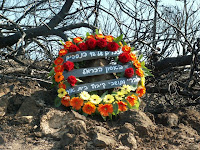 I spoke to a policewoman who looked as sad and as haunted as the many visitors. “There was no place,” she said. “The flames were 50 meters high and it was 60 degrees [140 degrees Fahrenheit].”

Today, I read that hundreds had visited the Carmel. I’m not surprised. We all lost so much this week – certainly not as much as those who lost loved ones, a precious lone son and only child, husbands and wives. So many lost their homes and possessions. The rest of us…we lost the trees, the forests, the green of the Carmel. We went yesterday to see it, to smell the fire that still is in the air. I thought perhaps I was going to say goodbye to the Carmel that I knew but perhaps really, I was going there to make a promise.

We will come back and watch as you renew yourself.
We’ll be here as you grow – from the roots of what lies below the fire or from new trees that we will plant.

It was sad seeing such death, such blackened trees. Tonight a storm comes in. I’ll imagine the drops of rain seeping below the soil, deep underground. Each drop will gently caress the roots – grow, it will beg. Grow. Israel needs you.