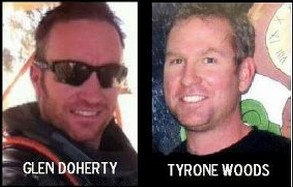 I keep hearing the words of Charles Woods as he speaks of his son Tyrone. Tyrone was a Navy SEAL – who did what Navy SEALS have been doing for as long as they have existed – he went to the aid of his fellow Americans. For 7 hours, he fought terrorists. He and Glen Doherty managed to hold them off, managed to kill 60 of them, according to some reports. And in all that time, no Americans arrived to help them, to save them. No one came to their aid despite repeated requests, despite available assets.

They watched my son die. As far as I’m concerned, there are people, in the White House, whoever it was that was in that room, watching that video of my son dying, their cries for help, their order ‘don’t help them at all, let them die,’ whoever that might be, it might be numerous people, you have the blood of my son, you have the blood of an American hero on your hands. I don’t know who you are, but one of these days the truth will come out. I still forgive you, but you need to stand up.

“They watched my son die.” Those words haunt me. I cannot imagine the pain this father feels – not only having lost his son, but having been betrayed by his government. President Barack Hussein Obama is the Commander-in-Chief – even if he did not give the order to leave these heroes behind…and I believe he did give that order – but even if he did not, the one thing we agree on is that this was his responsibility. It is his hands that carry the blood of these men.

Elie told me the story of one of his commanding officers. While the officer was off-base, at meetings or whatever, there was a training exercise and a nagmash (an APC) turned over and a commander was killed. There was another officer, of lower rank in charge of the exercise but Elie’s commanding officer was the commander above that officer and so he took responsibility; he took the demotion; he took the punishment.

His advancement in the army was delayed for several years because ultimately, he felt that what happened under his command, was his to answer for. There was never a question that it was a tragic accident; there was no order that could have been given to save the soldier who died and certainly there was nothing anyone nearby could have done to prevent it from happening. You train and you train hard because in war, you’ll have to scale those hills and drive over rough terrain. That time, it went wrong.

What happened in Libya was not a training exercise and according to several reports, there was aid that could have been sent in – drones filming it, ships within range. It was not an accident but an attack. And unlike Elie’s commanding officer, the Commander-in-Chief of the United States Armed Forces did leave a man behind, two good men, in fact…and even four if you count the diplomats.

They watched his son die – and for the rest of his life, that image, that reality, that horrible truth will forever be his reality. The blood of American heroes cries out to all who will listen. Responsibility must be taken – and it starts at the very highest address in Washington down to the sewers and  streets of Benghazi because no parent should ever have to say those horrible words ever again.