for a vacation for its soldiers. That’s great, right?

But wait, it gets better. Elie and a group of soldiers felt that the planned activities weren’t really appropriate for them and asked to be excused. Instead of simply sending them home – which is common in the army – their division commander decided that they too should be entitled to something special.

So, they called the unit rabbi, who was all to happy to take the young men and plan something. Within hours, Elie and several others were taken to Jerusalem. They are sleeping at a yeshiva for post-army religious guys who spend the day learning. At first sight, these boys seemed more ultra-Orthodox than my son and his friends’ “camp”, and Elie told me he wasn’t sure they’d be comfortable.

Without an army, Israel cannot survive. Without recognition that our lives and future are ultimately in Greater Hands, all the fighting is for nothing. To do one and not the other, to value one above the other, is not the way we have raised our children.

At first glance, Elie thought they had been taken to a yeshiva where the men learn all day, but do not fight and he wasn’t sure he would be comfortable. Within minutes, they learned that each of the men had been through the army, that they too had chosen a path that includes defending Israel in a physical sense as well as a spiritual one. Having spent their time in the army, they were now dedicating another portion of their lives to defending Israel on a spiritual battlefield. Neither side forgotten, both served with honor. From there it was easy and Elie enjoyed spending the day and the evening; everyone fit in very nicely.

This morning, the boys from Elie’s unit were taken to the Old City of Jerusalem, to several tourist sites. They were taken to the ancient tunnels that run below the Old City, to a small historical museum, and finally to a factory to see how tefillin is made. Elie realized from what they were doing, how the final pieces appeared, and where the factory was located, that his own pair of tefillin was probably made there.

Oh, that reminds me – during the war, some people sent me this picture and asked if it was perhaps Elie. It shows a soldier wearing tefillin and praying. I doubt he even knows this picture was taken, or that it circled the globe. He certainly doesn’t know that two different people sent it to me asking if it was my son.

There is a very important prayer Jews say each day, in the morning and at night. Shema Yisrael. “Hear Israel, the Lord is God, the Lord is One.” We say this with complete faith and focus and so we close and cover our eyes.

I hadn’t seen Elie for almost 6 weeks when I got this picture. Is it Elie? The hair is wrong. Elie keeps his hair shorter…but what are the chances that he had time to cut it. It doesn’t grow like this and isn’t it a bit lighter? No, I didn’t think it was Elie. 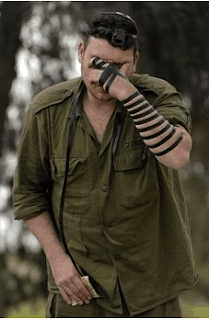 The line of the face is right; sort of. The chin really does look like Elie. The arms don’t seem right. Elie has more hair on his arms, doesn’t he? Elie always wears an undershirt. I’ve never seen him this disheveled looking. But, he’s been at war for so long, who knows. The arm holding the paper – that doesn’t look like Elie, but the chin, I said to myself again.

No, if I had to guarantee anyone any specific answer, I’d have to say, no. No…no, I am pretty sure not. I called over Elie’s youngest brother. He too didn’t think so, but wasn’t sure.

I asked his younger sister. She didn’t think so, “he’s not opening his shirt this way” and “it’s not his hair.”

I asked his middle brother still wanting to be sure. He and my son-in-law looked. Shmulik answered right away, with confidence. “No, it isn’t him. The tefillin is Sephardi.” Sephardic Jews are those that came to Israel from Arab lands and from Spain; while Ashkenazi Jews (like us) came from Europe, Russia, etc.

My son-in-law pointed out something else. “He’s using the wrong hand.” 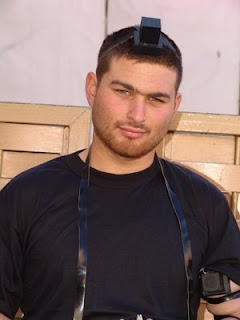 What this means, what this shows, is an example of what so many of us heard about, what Elie told me about. Many boys in Elie’s unit are not religious. On the Sabbath, they will listen to music or watch TV. At home, they will not keep the Sabbath as Elie does and yet…and yet while at war, they donned tefillin every day, wore the four-cornered garments known as tzitzit, as commanded in Shmot (the book of “Numbers”).

I was thinking about this young man, whose name I will never know and I was wondering if perhaps someone sent his mother this picture and did she smile when she saw it?

My son-in-law took pictures during my youngest son’s bar mitzvah celebration at the Western Wall recently. He took a picture of Elie wearing tefillin. His face is not covered because this isn’t during the Shema prayer.
It was the day after he had returned from the war. His hair had been so long. I hadn’t seen it that way in more than a year. The first thing he did was take a long, long, hot, hot shower and cut his hair.
Can you see how the chins are similar?
Two pictures of two Israeli soldiers. Both wearing tefillin. One is likely secular, one is most definitely religious. But there is something much more important that these two young men have in common. They were both involved in a war to protect their land and while there, both recognized the importance of giving thanks to the God of Israel, our Protector.
And this week, the army of Israel gave thanks – perhaps not to the other soldier, I’ll never know. But definitely to my soldier. And it gave thanks in a way that was so appropriate for who he is. Tomorrow, he will return to Ashkelon to join the other soldiers and from there, they will travel up north, back to the borders of Israel.
Elie won’t be home this coming Shabbat, but hopefully the next one. Safe travels, Elie…hope you had a great vacation – you earned it.

3 Comments on The Army of Israel Pays…