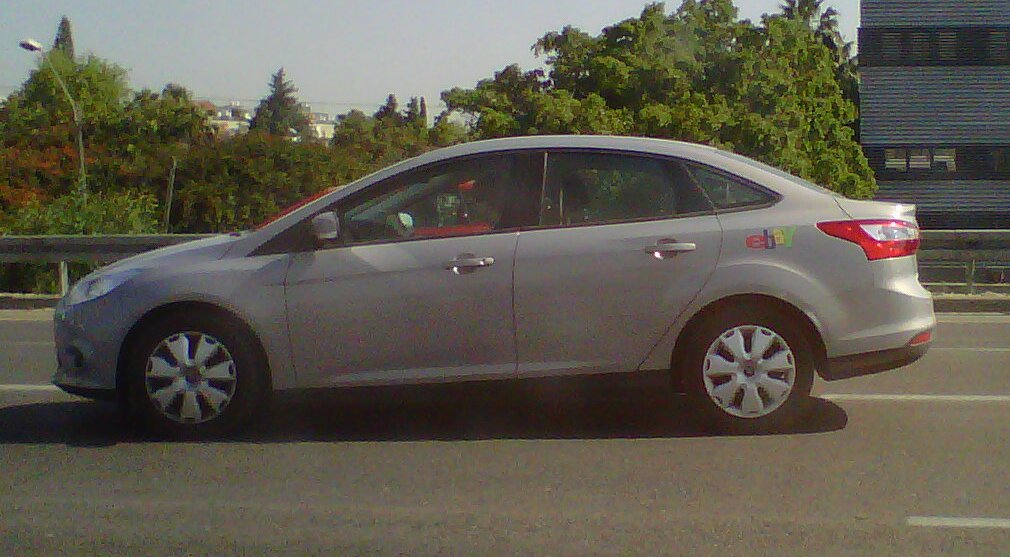 It’s a fact that I’m a disappointment to my sons. I am, without doubt, completely car-illiterate. Worse, I have this notion that you can credibly identify cars by color rather than make and model. So, as Shmulik and Davidi go about their lives, there is an unspoken contest. Which of them can photograph the coolest car?

My first attempt shows I’m more interested in the interesting than the exciting. I thought it was really cool that eBay has offices (and cars) in Israel.

With my latest picture, I’ve upset the order of things and best of all, I’ve clearly won the contest!

Worst of all, however, in the eyes of my two youngest sons, is that I didn’t even know I had won.

For months, they’ve been showing each other the amazing cars they’ve found.

Each time I try to point one out…it turns out to be something quite mundane. Davidi was, I believe, in the lead having captured a GT or an R-something…or maybe it was an RT and a G-something.

Shmulik’s been up there with brand new BMWs, not my thing at all.

A new Camry, a Cougar and an old American car that Shmulik thinks I should recognize (me? seriously?).

He offers me hints – a Chevy, blue…yeah…
On the day Shmulik drove me to my client because of my arm, he got really excited about one car and was trying to figure out if it was what he thought it was. He said the name and I was rather impressed – Maserati – but I have to be honest and say, it wasn’t nearly as exciting as I thought.

“It’s an old one,” Shmulik conceded.

And while we sent it to Davidi, it didn’t seem to tip the scales in anyone’s favor. And then…

Last week, I was walking in Jerusalem towards the light rail. I passed a fancy-shmancy hotel just as a couple drove in and got out of their car.

I took the picture – not really sure what I’d gotten. I don’t really know cars, but it looked like something that they’d want me to capture…and so I did.

I only took one picture because I’m not a kid and really, you just don’t stand around taking picture of other people’s car if you want to be a professional.

I had to rush to get to the station and I was thrilled that I got there about 2 minutes before the train. A few minutes later, I got a great connection on the bus and though I was tired, I was happy to be home.

And…then…a few days later, I said to Haim (my wonderful daughter’s wonderful husband) – oh, I got a good picture. He looked.

Now, Haim is a very special person but I have to admit – I don’t really think he wastes nearly as many brain cells on cars as my sons do and so I was hesitant to believe that I’d captured a Ferrari.

He zoomed in and showed me the logo or insignia or whatever you call that thing. A horse. Okay…now if I only know the insignia of a Ferrari. I tried sending it to Davidi, but couldn’t attach it to the SMS.

So, last night, as I was driving Davidi – I remembered the picture.He didn’t believe me. Yeah, Ima (mother in Hebrew)…Ferrari…no way…no way…no…wow….

He confirmed it was most definitely a Ferrari – in mint condition. I win!

“That’s just sad,” Davidi said. He can’t get over the fact that not only did I win, but I didn’t even know what I was taking a picture of!

“A Ferrari isn’t a pig,” he told me. Like I was supposed to know? Oh, bad…I actually asked him what it was, “That’s just sad,” he said again. “Horse. Ferrari.”

He transferred the picture to his phone – clearly expecting to take credit for it. I would have none of that! So I called Shmulik to make sure I got credit.

“It can’t be a Ferrari, then,” Shmulik answered. “All Ferraris are red.”

“Nice try. No way. I won,” I said, pretty sure that Ferraris can’t be all red because I caught a white one!

Anyway, my two sons have decided – apparently they have concluded that I wasn’t in the game and so my Ferrari doesn’t count. If you ask me, that’s just sad! I won!

Well, me and the elegant couple driving the Ferrari, that is! Now, if only I could actually drive one of those things – man, I would so so win for sure!