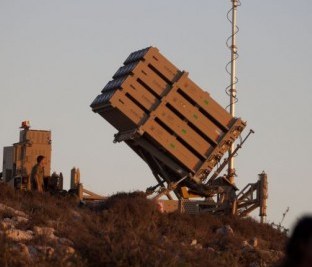 I moved to Israel 20 years ago. The first reality that struck me as being worlds away from any measure of normal was that there was a bomb shelter in the house we bought two years later. The second thing was that in the hospital, as I was being discharged, I was sent to a room where a young soldier congratulated me on the birth of my son…and handed me a gas mask for him.

Perhaps skip a bunch of other realities – like worrying about who got on the bus, where my kids were when something exploded, and intentionally going on a short “vacation” with my husband to spend money in stores up north after the summer’s war with
Lebanon decimated their tourist season.

I didn’t grow up with the threat of rockets, and yet, 8 months ago, I found myself hurrying into our bomb shelter frantically calculating where each of my children were…and worse, not knowing where my Aliza was, where my son-in-law and grandson were.

And today, as I was talking to someone, Elie was acting as my driver. I went to hear a member of Knesset speak. She showed up 45 minutes late – no one left. She explained that the Cabinet was meeting – it was Obama’s fault. Israel is getting ready. If Obama hits Syria, chances are quite high that Syria will strike out at us.

When the meeting ended, Elie came to get me. He joined in the conversation a bit and then, as it often does, his phone beeped and something in the way he moved alerted me as I saw him read a message. My Hebrew is quite good – not great, but not terrible…but it failed me. I couldn’t hear past the words Iron Dome and Jerusalem.

If Assad dares to fire rockets at Jerusalem….we will have to be ready. Iron Dome…another reality.