Aliza has a donut for Hanuka. It’s an Israeli custom and something we really only have in the house during these 8 days of the year. I let my kids go a bit crazy with it because it is limited in scope and I’m a firm believer in the concept that extremes enhance rather than diminish someone’s attitude for something that they know isn’t good for them.

Really, the only thing I can think of where I am extreme and yet believe it helps, is cigarettes. My kids have been told, more than once, that cigarettes kill – they know that because I have told them I will kill them if they start smoking. And lest anyone is ready to run to Child Services, no, I don’t really mean it, but they do know that I will not tolerate smoking. There is no leeway, no middle ground, nothing.

Getting back to the donuts…Aliza just ate dinner and drank three glasses of milk and then approached her donut. After half a donut, she can’t eat anymore. She’s upset because she doesn’t want to leave it. “Someone will eat it,” she says mournfully. I try to assure her that they won’t, but she keeps nibbling on it piece by piece.

Elie came down, watched her eating it slowly and started giving her a hard time. “You know you don’t want that. Why are you still eating it?”

She surrendered. She got up and walked away from the donut, looking sad. Elie called her back. “If you want to save the donut until tomorrow, I suggest you wrap it in a bag and put a note on it that it is yours.”

“That doesn’t work,” she told him in an accusatory voice. “When I had half a hamburger and I put my name on it, someone ate it,” she complained.

Elie was already smiling just at the mention of the hamburger, “and it was good.”

“Why don’t you apologize for eating her hamburger?” I asked Elie. “I’m not going to apologize,” Elie answered, “it was good.” 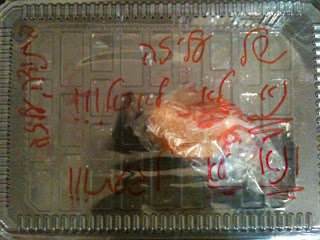 But he encouraged her again, and so Aliza has taken a plastic bag and she is writing her name on it and asking everyone not to eat it. She has explained to me that it is her favorite (no, not the chocolate filled ones or jelly filled ones…she likes the plainest ones of all).

And so, with a red magic marker, she has written “This is Aliza’s. Please do not eat it!!!! And please don’t touch it!!! With thanks, Aliza”

Well, I hope for her sake it works!