Pictures, after all, make a wedding last forever in the minds of those who attend, and those who were not able to come.

We missed my husband’s brothers, my brother, our sister-in-laws and our nephews on both sides, great uncles and aunts, cousins and more. It is a price we pay for living far, but one we accept because there is no where else we could live. And so, we sometimes share happy events through the pictures – and here they are. Shmulik’s unit was supposed to have been released – several dozen of them but in the end, only about 15 were able to come.

For them, and for all of you who have followed my family for the past weeks, months, and years, a glimpse of an incredible wedding.

A Jewish wedding has many traditions. for one thing, it is our custom that the bride and groom don’t see each other for a week before the wedding. This was the moment when Shmulik’s father (on the left) and Naama’s father (on the right) escorted him to his bride. Meanwhile, the bride sits on a special chair, waiting for her future husband. It is only moments away now.

There is a tradition – as ancient as the lives of Abraham,  Isaac, and Jacob.
Jacob was fooled into marrying Leah, when he wanted Rachel and so ever since then, Jewish men check to confirm that this is the woman they have pledged to marry.

And then, having checked, they lower the veil over her – it is a promise of the privacy, the intimacy, that will be part of their lives. 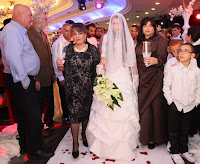 The groom is then escorted to the wedding canopy by his singing and dancing friends – the chupah, where the ceremony will take place is usually open to the skies and in this case, raised several steps to allow all to see the ceremony that will soon take place. Shmulik took this short walk with his father, brothers, and friends – singing and dancing, and music playing.

After escorting Shmulik, his army brothers returned to escort the bride. I proudly walked beside Naama with her mother.

The wedding ceremony is full of symbolism. The ring is placed on his bride’s finger, words of commitment are spoken. It is there in the pictures – the smile on both of their faces. With these simple words, they are married. There is more to come, but this is the moment. The agreement has been made and the smiles show it all.

Another tradition is that after marriage, a man begins wearing a prayer shawl when he prays. This is a gift his new wife gives him and he puts it on for the first time under the chuppah and says a prayer thanking God for bringing him to this moment. He may have become obligated to fulfill the laws of our Torah at age 13, he may have matured considerably when he entered the army, but this is another milestone – the boy has become a man and has now taken a wife.

And then, as Jews do, we mix the intense happiness with a reminder that our lives are not complete, that parts of our people and religion remain unfulfilled. We remember in that moment of happiness, a bit of sadness as well. There, under the chuppah, on this most special of days, the groom recites the simple and heartbreaking reminder,

If I forget thee, O Jerusalem, let my right hand forget her cunning. Let my tongue cleave to the roof of my mouth, if I remember thee not; if I set not Jerusalem above my chiefest joy.

A glass is broken – a sign that even in joy there is sadness.

We remember, even at our happiest moments, those tragedies that have befallen our people – the destruction of Jerusalem and the holy temple.

After the ceremony, there comes the expressions of joy. A Jewish wedding is lively and happy and my son’s wedding was so incredibly beautiful. His friends came and danced and so many of the people who attended took the time to watch the boys and smile. The music was loud, there was so much joy. They raised Shmulik on his shoulders; threw hearts and balloons towards Naama.

In the middle of the wedding, a second group of soldiers – the other half of his unit. They came in full uniform, vests and guns. Within seconds, the vests were thrown under a table, the guns piled in a corner with one soldier left to guard them.

And then it was to the dance floor – to dance with Shmulik and show their happiness as well.

They had come from base and would return to base after the wedding. They were allowed to relax enough to remove their uniform shirts, but not enough to drink anything.

I asked the photographer to take a picture of Shmulik with his friends and he laughed and told me that he already had.

In short, it was an amazing wedding – may it be the start of a long and happy marriage.

When my husband and I were getting married so many years ago, we understood one important truth that I would pass on to my children and their current and future wives and husband. The wedding day is a wonderful, exciting beginning…but it is only the beginning. What matters most of all is not that day, but every day that comes after it.

Within our family, new families are being created. Shmulik and Naama now begin their lives. They have waited a long time for this day, for these days. I can only pray that they are blessed with happiness and health, wonderful years and years and many healthy children who will carry the same outer and inner beauty that these two carry. My son and my new daughter-in-law – Mazel Tov! 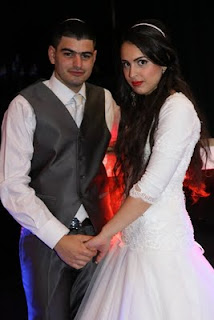