God willing, when this is all over, I want to show Elie this picture. Thanks to Jameel at The Muqata for this one on the right (other pictures from other sources). I don’t know where Elie is, but I assume that he can’t quite see this image and so I’m going to collect these and others for him.
Cameras of the international media showed many scenes of the army firing artillery today. In some cases, there were soldiers there – they flashed by too quickly to see their faces, although Elie told me that yesterday there were some cameras nearby and when the soldiers discovered them, they ordered the media to leave the cl 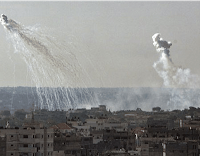 osed military zones.
For what it is worth, the media is lucky Elie’s group simply sent them on their way. I can’t imagine it is too smart to sneak up on an artillery unit.
Of course, I am not sure which of these pictures are a result of artillery and which are from the air force or tanks. I guess maybe Elie will be able to tell me. In any case, they are clearly a sign that Israel is no longer willing to take Gaza’s firing of rockets and missiles and mortars without a response.

Perhaps Elie will not be impressed at all by these pictures. After all, he’s seen the real results of these weapons. Perhaps it is just the colors and the perspective that make these pictures so dramatic.
I don’t know what his reaction will be but I like thinking of tomorrow…or probably several tomorrows away from tomorrow, when he will be back home. I hope the reality of what we are trying to create is very different than the reality we face today – when even during today’s fierce battles, Palestinians managed to fire almost 3 dozen rockets at our cities, injuring several civilians and causing several more to be treated for shock.
So – we answer rockets for rockets, finally. I can only hope that our message is heard, though by now, I think our government is actually committed to following through and stopping the rocket attacks. The thought that they would simply halt this operation, only to allow Hamas to rearm so that we find ourselves back here in the same place in a few months is simply intolerable.