Part of the luxury of living in Israel is feeling that we have a right, like all other nations, to point out when we are being treated by a double standard. The biggest problem of all, probably, is that too many of our own people lead the call for a double standard through some misguided sense that the world will accept us if only…if only… “If only what?”… I want to ask them.

I have always believed that if you act like a weakling, a second class citizen, you get Auschwitz. If you surrender to all rather than fight back for equality, you get Treblinka. And if you are the first to beat your breast in guilt and lead the call against Israel, you get blood libels, JStreet traitors, New Israel Fund apologists, and dead Jews.

No, we didn’t cause the Holocaust and centuries of anti-Semitism. We didn’t cause pogroms and inquisitions and crusades. At the time, living in predominantly Christian and Muslim lands, there was little we could do, if anything, to prevent them.

Where it was possible, Jews did revolt – in Treblinka, in Auschwitz, in Warsaw, and many other places. Then, our inability to fight like for like was a result of our status – a people displaced from our land. The only problem is, too many Jews (including our Prime Minister)  tend to forget sometimes that we are finally and forever home now and no one, not the Palestinians, not the Vatican (old or new), not the UN, and not even the left portion of our nation, will destroy us.

The Pope is coming to Israel, to our country, the land of the Jews. His scheduled visit is anything but non-political despite his claims to the opposite, and shows, at best, an incredible level of papal insensitivity. A look at the detailed agenda shows a wealth about the real intentions of the Vatican. At best, the carefully scheduled visits are an insult, at worst, they are a blatant attempt to instruct Israel on what the church will permit of us, how it will treat us. It is for us to accept it or fight back. Sadly, it seems our government is not standing tall. Rather, it is allowing itself to be treated as the second class citizens we were once. The Pope will be our guest; perhaps he is attempting to remind us of what it was like to be his.

In reviewing his schedule, remember that with all visiting dignitaries, every step taken brings with it a world of innuendo, underlying messages of priorities and intent. Who is placed next to whom, the order in which the dignitaries are recognized during speeches. It is all carefully detailed. Why then would someone expect Israel to ignore the details of the Pope’s visit…and why are we doing so?

First let me mention the response of a strong and proud Jew to a meeting with another Pope. When Pope Benedict XVI came to Israel in 2009, the chief rabbis of Israel were slated to meet with him. The Pope would come to stand for all the world’s Catholics; he would dress as he wished, regardless of any sensitivities to where he was. Let me also add that to a Jew, the cross does not offer a warm and fuzzy feeling. It was the cross that was the symbol of centuries of persecution and pain.

Rabbi Amar went to his rabbi to explain that he was not comfortable meeting the Pope while the Pope was wearing a huge cross. Despite a request to the Pope to consider the sensitivities of the people he would meet here and our holy places, the Pope refused. In light of this, Rabbi Amar went to his rabbi, his teacher, and asked his advice. Our rabbis dress a bit more modestly – typically wearing unadorned robes (in the case of Rabbi Amar) or regular suits (in the case of most of our Chief Rabbis). 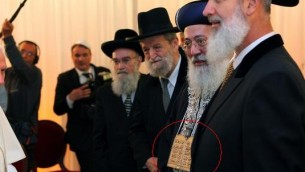 And now look at this Papal visit. Pope Francis will arrive for a two day visit. His first official event is in Bethlehem, where he will hold a large mass…together with Muslim/PA leader Mahmoud Abbas. So, let us get this straight – he’s coming to Israel and the first thing he will do is walk right passed all the Jews to meet with the Palestinians where according to more than one source he plans to “recognize Palestine”, “oppose the occupation” and support the Palestinian “struggle.”

After the mass, he plans to go to a “refugee camp.” He’ll have lunch with the Palestinians, with what Abbas’ adviser for Christian Affairs explains as “families suffering from the occupation…to witness the suffering of Palestinian refugees…this visit will help us in supporting our struggle to end the longest occupation in history.” Honestly, someone should buy Ziyyad Bandak a history book or at least teach him how to use Google!

No, the source for this isn’t only the Palestinians – even a member of the Latin Patriarchate in Jerusalem confirms that he is sure the Pope will offer a message of support to the Palestinian people.

The Pope does want to visit the Western Wall – which he will do AFTER he visits the Temple Mount to again greet the Muslims. The Vatican refers to OUR Temple Mount as the “Esplanade of the Mosques” – yeah, well.

“This wave of extremist actions of terror is surely of grave concern to all reasonable persons,” said Fouad Twal. But let’s understand that Twal is referring to some graffiti supposedly painted by Jews on Muslim and Christian sites and not about the ongoing attacks (physical beatings, etc.) of Christians. And of course Twal didn’t bother mentioning ongoing attacks, stonings, attempted stabbings, firebombing and murders of Israeli citizens.

In fact, if you listen to Twal, apparently slashing a tire of a Christian is worse than slashing the throat of a Jewish child. Did I mention that the Pope will go to Yad Vashem? Yes, he will – and not a single Israeli leader will stand up and condemn this “lip service” visit because that’s all it will be.

Rumor has it that the Pope will lay a wreathe at Herzl’s grave in Jerusalem. Again, this is meaningless compared to the support he will be offering the Palestinians throughout his visit.

The Vatican has a long, long, long history of sometimes blatant, sometimes subtle anti-Semitism. Hey, it took them until 1965 to admit the Jews were not responsible for the death of Jesus…of course, the same decree didn’t bother to apologize for the centuries of suffering and attacks that resulted from this inaccurate accusation. Nor did the statement recognize Israel, which had already been in existence for 17 years.

Pope John Paul II met with Yassir Arafar many times, and accused Israel of oppressing the Palestinians in an “Israeli-initiated Shoah.” No, we don’t expect this to be much more than a fancy show put on for Christians and Jews around the world…

We can’t really control what the Pope does, what he says, and where he goes, but we can control ourselves. Why is our Prime Minister going to meet the Pope versus welcoming the Pope within the walls of our governing offices? Will we close the Western Wall to Jews to allow the Pope a visit?

This is not a friend visiting Israel – this is a political visit carefully crafted to show support for the Palestinians while doing its best not to blatantly insult those Jews. But those Jews are different today. This is our country.

If the Pope wants to visit – let him, but why are we decking out Jerusalem with the Vatican flag? The ones he’ll go right by as he rushes to Bethlehem and his meeting with Abbas?

Tell me, when an Israeli leader goes to Rome, do they close off streets and does the Pope leave the Vatican to meet them at the Israeli embassy? Yeah, not.

Only when we hold ourselves to the standards of equality will others treat us with the respect we will have earned. Only when we stop explaining and apologizing and demand an equal and balanced reception, will we get one. I have no objections to the Pope visiting Bethlehem or meeting Abbas – but as he is flying into Israel, driving through Israeli cities and on Israeli roads, protected and escorted by the Israeli army, the visit should have been choreographed so differently.

If the Pope wants to console those who suffer, why does he go to comfort only those on the Palestinian side?

If the Pope is so busy bowing to Islam, let him fly into Ramallah and let the Palestinians protect him. Let them fly Vatican flags from their roof tops and let them explain why they hold Christianity in such contempt.

And on our side, when will we demand that our leaders act as all others?