There are so many reasons why I love Israel. Each year on Independence Day, a great comedian (and friend) I know named Benji Lovitt (see What War Zone) creates a list of the top reasons why he loves Israel – and matches it to the number of years since Israel was re-established. I’m wondering if he is already busy creating the list.

I’m not going to list 64 of them…but here’s one. A letter handed to each “activist” who came to Israel on the flytilla – a so-called humanitarian effort that focuses on Israel because, in truth, their hatred of Israel (and likely Jews) is so much deeper than any real concern they have for human rights. There is no flotilla or flytilla to Syria, Bahrain, Egypt, Libya, Yemen…only to Israel.

I don’t know who wrote this letter – though it was clearly sanctioned by the government. What I can tell you is that even if the flytilla idiots don’t read it – Israelis are reading it and walking around the country smiling today. Oh, this letter is from each one of us – to each one of you idiots who think to take advantage of our democracy. You probably won’t get very far today – most have already been turned down before they get on any planes – in Switzerland, Rome, Paris and elsewhere. Others have landed and been turned around. To each, these words come from our hearts! 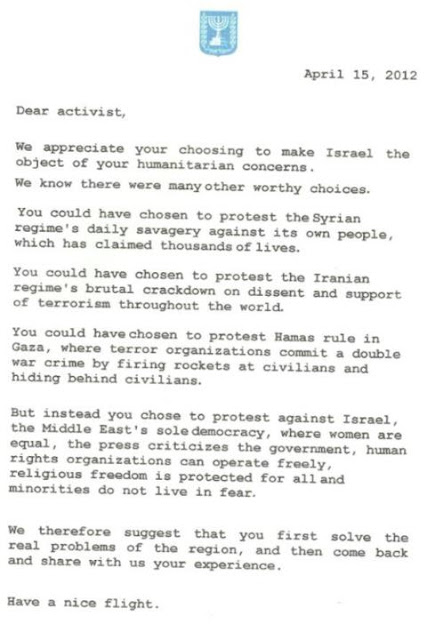