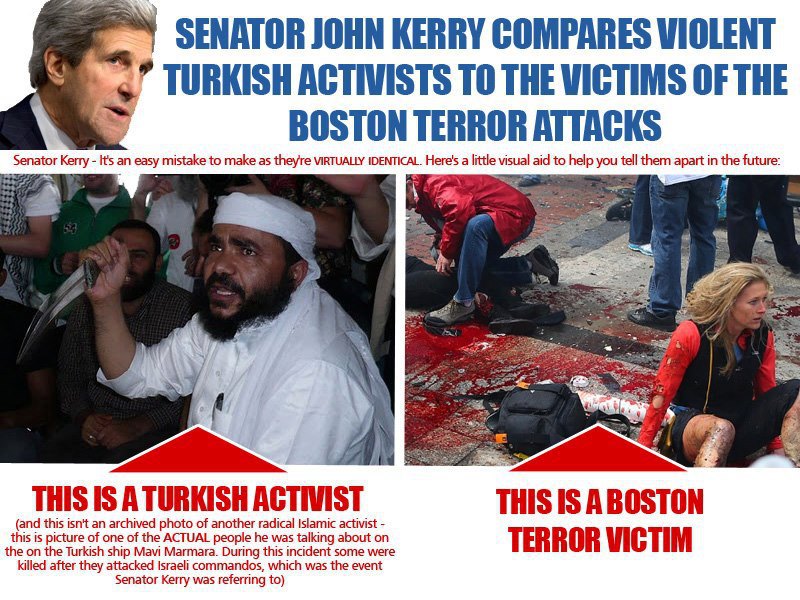 John Kerry has redefined the concept of stupid. Really…

According to a recent news item:

Speaking at Istanbul, Turkey, U.S. Secretary of State John Kerry made a jarring comparison between the victims of the Boston Marathon terror bombs and terror activists from the IHH group who were killed when they attacked IDF forces aboard the Mavi Marmara in 2010.

Kerry told his hosts in Turkey that he understands the pain of the families whose loved ones were killed aboard the Marmara – and added that he can understand their pain well, having just dealt with the families whose loved ones were slain in Boston.
Kerry said in his speech that he hopes the Israeli apology will lead to a thawing of Israel-Turkey relations.

Through the anger I feel – I find it hard to formulate a response to this incredibly ignorant concept. Did the Boston runners know they were heading into enemy territory, as the thugs aboard the Mavi Marmara flotilla know?

Did the terrorists warn the people at the finish line and those who were approaching it after running so hard…as Israel repeatedly warned the so-very-violent “humanitarians” aboard the flotilla?
Does Kerry think that sweet little 8-year-old boy, the women who were killed, and the 170+ people injured were armed and did they start attacking the bombers…funny how the media forgot to show how the victims of the Boston marathon terror attack could have easily avoided being murdered or injured had they avoided breaking international law…oh wait, they didn’t break international law by running a legally declared naval blockade. They didn’t attack soldiers who had, for the better part of a few days, been warning them not to approach a war zone.
All those people did was to go out on a beautiful day, in their beautiful city, to enjoy a peaceful event.
John Kerry – you owe the nation of Israel and the army of Israel an apology. We owe the Turks NOTHING and the vast majority of Israelis care nothing about thawing Israel-Turkey relations until Turkey starts acting like a modern nation and not yet another aggressive, hate-filled dictatorship.
And worse, John Kerry, worse of all is that you owe the victims, their families, and all of the people of Boston an apology.
Shame on you!