As a Jew, it is hard to reconcile and come to terms, even more than 60 years later, with what was done to the Jews of Europe. A trip to Poland brought few answers, just a harsher reality, a picture more clear. A sense of overwhelming helplessness is one of the emotions you feel walking through a gas chamber, beside the ruined crematoria at Auschwitz, or the massive piles of 800,000 shoes in Maidanek.

How could unarmed civilians, old and young, have prevented an evil force that marched at them with brutal strength? Could anything have saved them? As an Israeli, there is a sense of power, helplessness defeated. Yes, something could have defeated the Nazi war machine. We came, as Ehud Barak once said in Warsaw, decades too late to help, but we came nonetheless. 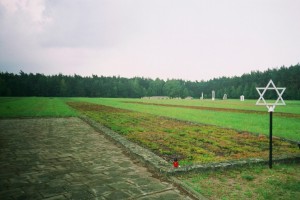 The sense of helplessness is gone because Israel remains on the watch.

Can another Holocaust occur? Undoubtedly, the answer is yes. But this time, the world is more aware of the warning signs. Dictators can no longer spout hatred with immunity. The world, nations of the west, Israel. We listen and can respond. We believe that evil can triumph when good people are silent. We know the cost of that silence.

Last night, as the commemorations in Israel began for Holocaust Remembrance Day, word came of a massive terrorist attack in Sinai. Our Passover holidays are over and most of us have returned to work and school. The number of Israelis this week, versus last week, was thankfully small and yet, Israel swung into immediate alert. Ambulances raced to the border – we will care for our own. Come home now was the message sent to all Israelis in Sinai and if you need us, we’ll come get you.

There was no Israel to come get them. No country that swung into alert as the dawn of Nazism brought darkness to Europe. This morning, I contemplated, as I often do, what thoughts and memories of the Holocaust we pass on to our children. What age is too young? If we wait too long, are we missing the opportunity to instill a sense of what was done, not just the facts, but the horrendous realities of the humiliation, the hatred and the unrelenting hunt to destroy all remnants of an entire people that was so much a part of what the Nazis inflicted?

I heard of a story where a six year old was told about the showers, some fake and some real, that the Jews were forced to endure before being gassed to death. Since then, the child has adamantly refused to take showers. Too young. Prince Henry felt no qualms about wearing a Nazi uniform to a costume party. Too old.

The Jew in me feels that it is imperative that we share the lessons of the past, no matter how humiliating. The Israeli in me insists that with this message, we make sure our youth understand that we are no longer helpless, no longer unable to defend our own. We will fly anywhere, fight everywhere to ensure the safety of our people where they are, or we will bring them home. “We had no weapons, we had no country,” a Holocaust survivor explained on the radio this morning. Today we have weapons. Today we have a country.

And yet, despite this feeling that we are no longer the helpless ghetto Jews of Europe, the mother in me wants to protect my children from the anger and the pain, the memory that we were hunted and slaughtered, tortured and gassed. It is a dilemma I face constantly, brought to the front even more clearly each Holocaust Remembrance Day when my children’s school spends the day teaching them the very information I have been so gently trying to impart.

For my children, the Holocaust is very personal. Their grandparents were survivors. Their grandmother was in a gas chamber, rescued moments before her death because the Nazis had, for once, miscalculated and needed more women for a work detail. Their grandfather was a wonderful man, a man of honor and humor. He would laugh and rule the family, and then quietly admit that the one thing he wanted most to have done in his life, was to have found a way to save his mother. My husband never knew the love of a grandparent because all were murdered and my children, who were and are so loved gain a deeper understanding of what that means as the years go by. 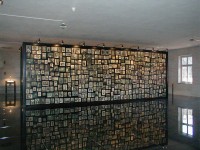 Wall of pictures (one of many) at Auschwitz. These were found in the luggage brought by the Jewish victims…and then “collected” by the Germans…as they collected eye glasses, hair, suitcases, prayer shawls and even artificial limbs.

The sad reality in today’s world, however, is that more than sixty years after the Holocaust, there are voices saying that it is time to forgive, time to forget. The world has greater problems, or at least ones that seem more urgent. There are places experiencing great famine and drought, warfare and terrorism continue to rob thousands of their lives each year. Unrelenting natural disasters continue to occur throughout the globe. Earthquakes, hurricanes, tsunamis.

And if all of this wasn’t enough, we have the Holocaust deniers who continue to try to erase the history and lessons so painfully learned. These historical revisionists are not old and fragile, dying slowly as the years pass by. They are waiting for the time when the world no longer wants to hear, no longer believes, no longer feels a need to remember the tragedies of 60 years ago when today’s tragedies seem so much more real to them.

Driving my 10 year old to school today, we heard a brief news update about today’s commemoration in Israel. A siren at 10:00 a.m., thousands of Israelis in Poland commemorating the day there. Speeches, gatherings, memories. These are our answers to the Holocaust deniers and our promise that we will remember. My son began telling me about the showers and of the gas chambers, how they treated the Jews like cattle, herding them into trains.

Not too young to know, it seems and not too old that he isn’t saddened by the thought that great suffering was caused sixty years ago, in a far away place. My choice, as a Jew, as an Israeli, and finally as a mother, to make it more personal.

He carries the name of a survivor, is a brother to two who carry the names of those who did not survive. We spoke of his paternal grandmother and grandfather, both survivors who died before he was born. I told him of the great uncles he had lost and the few that survived. 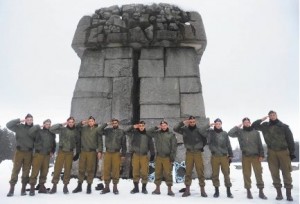 irst, I told him that one uncle still bears the mark on his arm to this day. “It will never go away?” he asked. “Never?” And therein lies the response to those who ask why we as a people cannot “get over” the Holocaust, why we think of it, why it guides us as a people and a nation.

No, it will never go away. Never.