I am disgusted that no matter how much this horrible, disgusting, hate-filled, ignorant crime is condemned by all spectrums of Israeli society – including members of this man’s “tribe” – it isn’t good enough and so innocents from that community are being hounded and hunted and hated, even though they too are innocent and simply trying to live their lives according to the rules they believe in.

I am disgusted that a baby was burned to death in an arson attack. No baby, Arab, Christian or Jew should be the victim of violence and as a mother of five and a grandmother of three, I agonize with that baby’s family, with his mother, his grandmother.

I am disgusted with media and journalists and people who have rushed, before the police know the facts, to condemn not just the act, but a specific group of people for the crime of arson and murder. What do you gain by accusing, perhaps falsely? Do you win some great award by identifying, without evidence (or with two Hebrew words written on a wall as your only evidence when there are hundreds of thousands of Arabs who can write in Hebrew)?

I am disgusted at the violent stoning attacks – hundreds of them (60 last week alone with 22 people injured), that have taken place in the last few days, weeks and months. People have been hurt; damage caused. Mostly, though, there have been miracles – as with the endless missiles that missed. God watches over His people and so, in some twisted logic that I cannot understand, if the missile misses, it’s okay; it isn’t like it was aimed at 300,000 civilians. It hit an empty field…move on to the next news item (if it is even reported).

Stoning a car? Okay, so the window was broken and the passengers terrified, but they’re fine. No blood. Move on. So long as the suspects are Arabs (and in this case we know because many have been caught and arrested), there is silence from those who only want to focus on beating their own breasts in shame, castigating their own people for intolerance.

Buses are being attacked – broken windows, a few cuts…move on. Until, God forbid, a driver loses control and crashes…move on.

I am disgusted at how often the Jerusalem light rail, a train I take almost daily, is attacked – almost always at the Shuafat (Arab) station. Most often, the incidents are not even reported; few statistics are gathered by the media. Move on. The windows crack, but they anticipated the violence so no one has been hurt…well, except when they threw tear gas on the train I was in (and still the media didn’t report it). I went to the City Pass office to confirm that they knew about it. They did…and still it was not reported. Move on.

Gunfire hits a family car on the same road where Malachi Rosenfeld was murdered a short time ago. But this time, miraculously, the shots missed. Move on. No pity, no story. No condemnations. 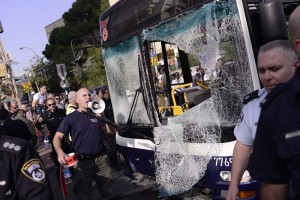 I am disgusted by those who burn this land, yet claim to love it and even own it. Hundreds of dunams, perhaps even thousands and more, have been destroyed by so many cases of arson this summer. So long as the suspects are Arabs, these fires are not condemned.

I am disgusted that I do not see condemnation of the Arabs again trying to burn down the Tomb of Joseph in Nablus. Is this not an attack on all Jews? Yes, Joseph died thousands of years ago, is he no longer ours?

I am disgusted that our disgust can never be bi-directional. I am so deeply saddened that the ghetto mentality thrives, even here in Israel. Don’t make waves; don’t make noise. Ignore the violence; expect it. Don’t, whatever you do, don’t hit back – they’ll only come and hit us all worse. Be quiet.

We didn’t see; we didn’t hear; we don’t know…just please, leave us alone. We’re sorry…we don’t even know if we did it, but if it will curtail the violence brewing on the other side, we’re so sorry.

We have failed miserably because we brought with us the ghetto Jew who always looks over his shoulder to what others are saying and thinking.

They say we murdered that child – quickly apologize, be horrified, be sorry.

Act by act, we must react, but only, only when we have the facts.

We know that Yishai Schlissel easily outwitted the Israeli police and in an act of hatred and violence, stabbed six innocent people so I am also disgusted at the Israeli police, who should have, and worse, did know better.

Beyond the disgust, remains deep inside of me the fundamental belief that Anne Frank was right, at least about the Jewish people. She said she believed that people were, at their heart, good. I do believe that – of all people, but most especially about my own. Not because we are better, but simply because I know “us” better than I know any other.

We are a caring nation, a loving one. For every incident of violence such as Schlissel’s atrocity, the burning of the Church in the north (one I have taken Christian guests to many times), the death of Mohammed Abu Khdeir, etc, there are at least a thousand acts of kindness done here and abroad by our people.

Can you erase the honor of our society when hundreds fly to Haiti because one stupid man acted in hate? Does the inhumane, barbaric murder of an Arab child lessen the amazing work we did in Nepal, Kenya, Indonesia and elsewhere?

There are thousands of ultra-Orthodox people working in organizations like Ezer Mizion, ZAKA, and Yad Sarah – organizations they created and share with the entire Israeli people. Do their acts of kindness on a daily basis suddenly lose meaning?

Why are we suddenly only defined by acts that represent less than 1% of our population? That are celebrated by less than 1%? It is so wrong to allow others to forget the essence of Israel – the kindness to the families of the three boys last summer, the prayers of a nation as our soldiers again went to war. All the times we have gathered in unity to welcome our oppressed – from Yemen, Soviet Union, Ethiopia, and beyond.

If you believe that what happened in one small Arab village called Duma represents Israel in any way, you truly do not know this people, this land. I am disgusted that in grabbing the ears of the media to bemoan an imperfect society, you slander a nation and people who have done so much, for so many, for so long.