Wanna learn the history of Israel in a nutshell? Here is is – in a single headlines.
The Zionists proclaim new State of Israel

Read here the new state because even then,  everyone recognized there had once been another. As for the reference to Zionists – it was written in a time when the world did not judge Zionism to be evil, when they recognized it was, quite simply, the fulfillment of our dream, our hope.

Truman recognized it and hopes for peace

So, to those who have written to me to say that the US was opposed to the creation of Israel and only gave into “Zionist” pressure – I would say this proves you wrong. There was no time for such a lobby, such pressure. US recognition came eleven minutes after the State was declared and the US has been one of Israel’s staunchest allies ever since.

So much for Truman’s hope of peace – and ours. The Arabs had a choice – as we did. They could have settled for about 1/2 the land – and instead, they chose war. They lost. The rest, is history. Their wishing they had chosen a different path (a path that led to the deaths of tens of thousands of people in war and terrorism in the decades that followed) is too little, too late. You cannot reverse history and many decisions.

The Arabs wishing to rewrite history and return to 1948 or whatever lines…is somewhat equivalent to the Native Americans offering to give back $24 in exchange for Manhattan. In hindsight, it may not have been the best of decisions – but it is what it is…and that ship has sailed.

They bombed Tel Aviv – as they are threatening to do even today. They ordered an invasion, as they did again and again in the decades that followed. The one thing they have never tried…not then and not now…is to offer a genuine peace. 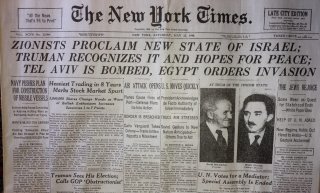