Yeah, you aren’t going to read this anyway, right? I mean, what are the chances? So let’s be informal and get right to it. I’ve been thinking about writing this letter for…for…how long have you been in office? Although, to be honest, the real question is probably how much time do you have left in office? That’s the important figure so we can calculate how much more damage you can do – to Israel, to America, to the concept of justice, democracy and freedom.

And yeah, you probably know what I have to say too. You know I’m angry, so angry, I’m probably to the level of pissed, but that’s not a nice word and I’m doing my best to keep this professional. I’ll try to be diplomatic because, according to the world of Barack Hussein Obama, being diplomatic is all that is necessary.

I’ve been really busy the last couple of days – I was on vacation with my husband of 30 years. We went to two places of interest. We kayaked down part of the Jordan River, under the Arik Bridge (and no, it isn’t named for Arik Sharon!) and we went to Nahal Taninim.

There are lessons to be learned in all that happens and I’m a firm believer in the concept that even…or perhaps especially…from a bad experience, you can learn so much. In this case, our weekend away was a delightful oasis of time and quiet and peace. When you go kayaking on the Jordan River, well, it’s mostly calm, very calm. And green, so very green and beautiful. Birds of so many colors fly past and because this is Israel, you 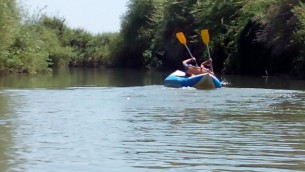 start conversations with people along the way – like the young couple we met, or the two boys who passed us early on.

Kayaking on the Jordan River

Lessons – mankind comes and goes, but the river remains. All that came before is gone, and still we are here to float along on the Jordan River, and we’ll be doing that again in the years to come, long after you leave Washington. 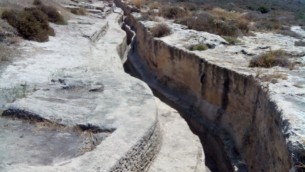 And the second lesson for you comes from one of Israel’s many national parks. This one is located a bit north of the coastal city of Caesarea. Nahal Taninim is a lasting testament to nature beating man, to the fallibility of man. We walked through a trench dug by the Romans. For 400 meters, they dug deep into the rock…until they realized their efforts to bring water to Caesarea via an aqueduct was doomed.

The trench they had dug was at least 6 meters BELOW the city. They abandoned the idea but the deep trench remains, more than 2,000 years later. The Romans, of course, are gone but the Jews still walk through the trench and smile at the idea of the earth defeating man’s plan. One lesson there – mistakes can often live on long past the person who makes them.

In a few hours, Israel will again close down – as we do on Shabbat, many of us will cut ourselves off from the world; let you do what we want while we pull into our own world, our own culture, beliefs, and dreams.

Shavuot is perhaps one of the least known holidays – and one of the most important. It marks the time we as a people assembled at Mt. Sinai, when we received the Torah.

So why am I writing to you, Obama – let me explain. In the midst of my vacation – two things happened. We were, in fact, betrayed twice over. One is so typical, we don’t actually consider it betrayal. Gaza, run by Hamas, fired rockets at Israel. It actually didn’t make the news – even the media is bored with the rockets that terrorize but thankfully cause little damage.

The second betrayal came from you. On the one hand, we’ve come to expect it; on the other, this time after your State Department agreed that one cannot expect Israel to attempt to negotiate with Hamas, we were, I’ll admit, lulled into a false sense of your intelligence. We thought you, or at least your government, actually understood there are red lines beyond which, even YOU can’t expect us to go.

Recognizing Hamas is the ultimate insult and the final insanity. Over 1 million Israelis live within regular rocket fire. For God’s sake, the very day you recognized Hamas, they fired two more rockets at us! You are NOT a friend of Israel – NO FRIEND of Israel would give Hamas the power and recognition you handed to them and the closest analogy I can give you is a simple one.

What do you think Americans would feel if Al Qaida were recognized at the UN and given a seat? How would they feel if a so-called ally of yours – Britain, or France – just said – hey, get over that World Trade Center thing…it wasn’t really terrorism and you have to understand their side. They thought bringing down those buildings and attempting to murder 50,000 people was the only way to make themselves heard.

They aren’t really terrorists and we need to negotiate with them. Well, Obama – our dead are no less holy than yours. And if your agenda now includes talking with Hamas – good luck. Go on. Go negotiate a peace agreement with them. I suggest you offer them Puerto Rico (no offense intended to the people who live on that lovely island). Or better – how about giving them Oregon? Idaho? From what I hear, Michigan is half theirs already so maybe there’s your solution. In fact, if you ask the Palestinians, they’ll probably tell you it says in the Koran that the Midwest belongs to them.

As for me, I’ll end with a blessing…oh, no – not for you Obama but for those who have suffered at the hands of Hamas. May God bless the memories of those murdered by Hamas and watch over those who remain in danger from them.

Tonight, we celebrate the moment when God gave His people the holy Torah. Nations have come and gone, Obama, but the Torah and the gift God has given to my people lives on.

Tonight we celebrate – becoming a people who worship one God but more, believe, truly believe in justice and doing what is right. It is truly a shame that according to the US government – these are no longer important values to America.

The clock is ticking for you, Obama – soon enough, you will leave office and return to civilian life. The legacy you leave for America is being written now – in the poverty, the diversity, and the betrayal of values once cherished by a country which is now being led by a fool.