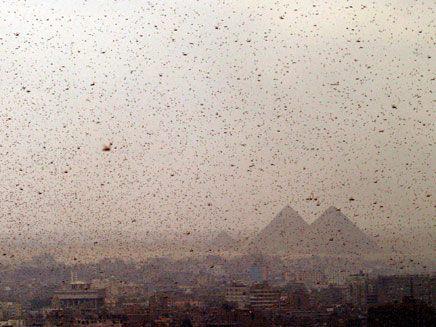 It’s true, you know. It really is. I believe He lives on a plain far above us all but more, He smiles down on us benevolently and every once in a while, quietly, He plays a bit of mischief on the world, wondering if perhaps they’ll see the irony…they rarely do. There are so many instances of this irony, so many chances God gives us to see that there should be so much more meaning to things than the superficial way in which we interpret events.

Today’s news strikes me as one of those times when God is testing us, daring us to draw the lines between the dots. Most won’t…and I know that God knows that too. But still, the dots are there…specks on the horizon…oh wait, perhaps those aren’t specks at all…perhaps they are locusts?

In just under three weeks, Passover is coming. I won’t talk about what I feel about Passover; perhaps later. It comes each year with a mixture of emotions and a ton of work…but today’s news made me smile. No, I’m not happy about the suffering of others and I can imagine that having a swarm of locusts attack your fields and homes can be disgusting and depressing and more. I’m sorry for the Egyptians suffering this attack of locusts…I am…really. Officials in Egypt have released a statement that they estimate as much as 30 million locusts have swarmed over Egypt causing massive damage to crops.

They are hoping the weather will cooperate and bring winds to blow the locusts into Saudi Arabia. I’m sure the Saudis appreciate the generous offer and wishes of the Egyptians.

No, I don’t smile for the suffering and devastation – that isn’t my culture, my religion.

But yes, I do find myself quietly smiling for the irony that one of the ten plagues returns, weeks before Passover, seems to have returned. And I can’t ignore the irony that it comes under the leadership of the Muslim Brotherhood, whose anti-Israel stand is clear, as are the words they use to vilify the Jews. I can’t help but remember the Egyptian President calling the Jews “the descendants of apes and pigs.” Oh, and he called us “bloodsuckers” too.

No, I’m not laughing…but come on, locusts? Egypt? Passover?

There has to be a message in there so clear perhaps even the Egyptians will see the irony this time.

No, just kidding. The Egyptians won’t see it…but God knows, I do.