This is a picture of Gilad Shalit. It is being spread around Facebook – presumably taken in his parents’ kitchen. It is from last night – as he lights the second candle of Hanuka – the first time he has been home to do so in six years…

There is much we can learn from this picture – here’s some:

1. Gilad is home – and this picture was released by his family. It was taken by someone in the room with him – not by press lurking about trying to steal his privacy. As such, it is a gift from Gilad and his family to all of Israel. Thank you, it is saying – thank you for leaving me, leaving us, to this time. We know you care – so here’s a glimpse of our son…isn’t he so beautiful. Thank you, Israel. 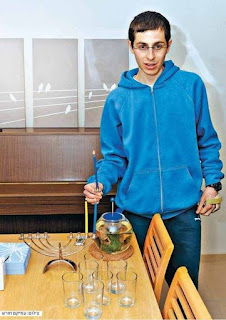 2. He looks good. Doesn’t he? Thin, but so much more alert. Look at his eyes – they don’t seem haunted.
3. He still has a long way to go – look at his left hand. He’s got a brace on his hand. This is likely the arm that has undergone surgery, the one in which he had shrapnel for five years while Hamas refused him medical treatment.
4. He’s lighting the Hanukah candles. Hanukah is about a small group defeating a much larger army. There is an irony here. Gilad was one; the large group here might well be Hamas and the 1,000+ murderers, terrorists and thugs they demanded as payment for Gilad. There is victory in this simple picture.
This week we released the last 550 prisoners. One attempted to kill a famous rabbi in Israel…an old man. Upon his release, the prisoner called for the rabbi’s death and said he was not sorry. Of the 550, more than 370 were like this prisoner, convicted of attempted murder. They are different from the first batch only in that they failed to accomplish their mission.
As with the first group, I can only say again that I would rather live in a land that would smile in joy over a simple picture of Gilad in his mother’s kitchen lighting the Hanukah menorah, than live in a land that celebrates the return of 370 attempted murderers.
Tonight, after a day with my youngest daughter, I sit in my living room as the candles burn. Three candles – as we start the third day of this holiday. Hanukah is the season of our triumph – it is as simple as that.
Happy Hanukah, Gilad – and thanks for giving us another glimpse of your recovery and return.

4 Comments on Gilad Shalit – It’s all in the Picture