Bear with me a moment, please. Sometimes I write (or speak) as one would go fishing. I throw the idea way out into the lake and you don’t understand why I’m starting in the middle of nowhere until I pull it back in to show my point. Of course, plenty of times, I get lost along the way, proving that this model may not always work, but such is life that I continue to use it. So…

Elie was born on a beautiful Spring day. Healthy, thank God, beautiful, and ready to meet the world. When it was time to leave the hospital, I signed some papers, got an envelope with his footprints (lest he be stolen, he could be easily identified), and was sent on my way with my little boy.
Several years later, I took that boy, his older sister and his younger brother, across the world because I believed (and believe) it was the right place for him to grow into a man, into the person he has become.A few years after we arrived, we were blessed with another baby boy. It’s a long story, that I’ll tell another time, but this new baby looked like no one else in the family, except Elie. He too has blue eyes; the brown hair with the blond highlights that faded as he got older. His face is the same shape and even elements of his personality and how he behaved as a baby are similar.
On the day I left the hospital with this little boy, I was handed papers to sign. There was no paper with a footprint – babies are very rarely stolen in Israel; children are not kidnapped nearly as often and more likely if a child disappears, it is because a parent accidentally left the child in the car and someone stole it. On the few occasions when that has happened, the country is mobilized to find the child; all eyes search until the child is found. I can’t remember the last time a child was kidnapped in Israel and in the last few years, the very few children that went missing were parent or relative-related.
So there was no paper with a footprint, and I took that as a relief. At least I didn’t have to worry about that here in a land that many people think is surrounded by violence and terrorism (even back then). Two strange things did happen, as I was being discharged with my new son. The first was that I was handed a check for several hundred dollars (in shekels).
“What’s this?” I asked the nurse at the station.
“Bituah leumi,” she answered. National health insurance. That day, and each month that followed, the government issues a stipend per child to help the parents in raising, clothing, and schooling their children. That was nice. In America, I was asked to sign insurance forms indicating the cost, in thousands of dollars, for my hospital stay.This time, I wasn’t sure what to do next, so the nurse told me to go to the room down the hall, “the door is opened.”
I walked down the hall, tired, not very focused, anxious to get home and really introduce my children to their new baby brother, the first of my children to be born in Israel. The room was more warehouse than hospital and there was a soldier there.I walked up to him with the paper from the nurse never suspecting anything. He smiled with all of his 18 or 19 years of charm and said, “Mazel tov.” Congratulations.
I thanked him as he turned around, pulled a small blue suitcase from the pile and started to complete some forms. He asked me to sign something and pushed the case towards me. In America, when I left the hospital, I was given diapers and formula and samples of products the manufacturers hoped I would try and later buy. It was handed to me by a nurse as I was leaving.
“What is it?” I asked the soldier.
“A gas tent for your baby,” he answered, not quite understanding how I failed to know this.
My eyes filled with tears, “you’re giving me a gas tent to put my baby in?” Now I had his attention. I wonder how many women started to cry in front of him. “That’s not normal. Do you understand? That’s not normal.” It was 1996. Israel had already been attacked once by Iraq firing SCUD missiles at its citizens. Though none of those missiles had chemical weapons, the threat was there, and therefore all Israelis were issued gas masks. Children under three were issued gas tents.
“Yehiye b’seder,” the soldier said to me and smiled gently. It will be okay, he was telling me.
Okay? I thought. You’re telling me that I might have to put my infant in a gas tent. We had been issued gas masks, each of us, at some point during our early years here, so this shouldn’t have come as a surprise. And yet it did. Obviously, you can’t put a gas mask on a newborn, so they developed a tent in which you place the child. To the soldier, this was a part of life and so he tried to reassure me. Everything will be okay.
So, by now you must really be wondering. I’ve left you in the middle of the lake with a nice story that has nothing to do with being a soldier’s mother. So let me start pulling it in. Elie came home yesterday and, as he often does, remembered to stop and get the mail on his way to the house. In it, was something from the Home Front, the organization responsible for making sure Israel’s citizens are ready for any type of threat. 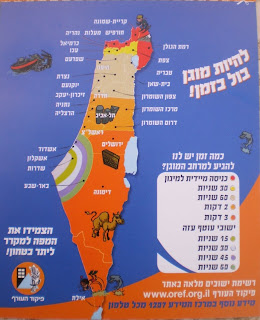 They sent us something that is designed to be attached, hung, or using the magnet conveniently located on the back, stuck to the refrigerator door. The slogan says, “To be protected exactly in time.” (Trust me, it sounds better in Hebrew).
The rest of the hand-out features a map of Israel in various colors. To the right of the map, the question: “How much time do we have to get to a protected area?”
Below the question, there’s a legend, divided into two parts. The top part covers the bulk of Israel from the north (bordering Lebanon and Syria), the instructions say to enter immediately. The next area, just to the south and west of these areas shows that you have 30 seconds.
From there, down through the rest of the country, you have anywhere from 60 seconds to 3 minutes. To comfort those who know us personally, we are in the 3 minute zone, aren’t we lucky?
The lower legend is for those communities bordering Gaza. As they already know from the last war, they have 15 seconds to 60 seconds to prepare and enter the protected areas. What I find both humorous and a bit sick, is that they thought enough to add some symbols to the map. Tel Aviv is marked with several tall buildings. As it is our most cosmopolitan city, this is appropriate.
Jerusalem is marked by the Western Wall, all that remains of our Holy Temple, destroyed more than 2,000 years ago, and this too is appropriate. The vast area (by Israeli standards, don’t forget all of Israel is the size of New Jersey), of the Negev desert is marked by a single camel.
The fun resort town of Eilat, our southern-most city, is marked by a dolphin and a snorkeling man in a red bathing suit. He is balanced out by the man on skis at our most northern point in Israel, high atop the Hermon mountain in the Golan Heights.
And finally, off the coast of Israel, we are comforted to find a naval vessel, standing on watch and protecting our borders. All this, I assume, is to try to lend a sense of normality to what is quite simply a warning to our citizens. Be prepared because at any given moment, you have anywhere from no time to three minutes to run into a shelter.
Long ago, with a new baby, I stared at an Israeli soldier trying to make him understand that this wasn’t normal. In a world where a woman is handed a gas mask for her newborn baby, I guess it is natural for her also to have to know how long she has to protect her family, to get them to a safe area.
The shame, then, goes not to this country, which is simply doing what it can to protect its citizens, but to our neighbors, who have created and perpetrated the violence and war-like actions for so many years. Israel has done so much for peace and for the illusion of peace. Today’s hand-out reminded me of how hard we try to make normal something which is so incredibly not.
Just as years ago, I felt the need to remind that young soldier that in a normal world, babies don’t need tents to protect them against missiles that might carry chemical weapons, in a normal society, citizens shouldn’t receive a note from their government telling them they have, at most, 3 minutes to find shelter.
When that young soldier tried to reassure me, I was a woman in my mid-thirties, the mother of four children, but the wisdom, ultimately, was his. And, as the soldier reminded me, all will be well. It will be okay. Yes, my refrigerator now has something new decorating it, but more out of amusement than fear. The larger lessen, I think, is that sometimes, as we move through our lives, our definition of normal moves with us.